Texas Normal College and Teachers Training Institute was founded in 1890 as a private university. Its primary mission was to prepare students to become teachers for the growing North Texas area. The school, now the University of North Texas, was governed by a Board of Trustees. Membership was made up of businessmen and lawyers who helped organize the institution and arranged the acquisition of land for the new institution.

In 1899, the school was accepted as a state institution. From 1901 to 1925, seven normal schools were organized as normal or teachers’ colleges. They were located in San Marcos, Canyon, Denton, Commerce, Alpine, Kingsville, and Nacogdoches. They expanded access to instruction in Texas from the previous three institutions that offered teachers’ training: The University of Texas, Sam Houston, and Prairie View.

In 1911, the state created the State Normal School Board of Regents to oversee the normal schools in the state. The legislation authorized the new Board to transform the state’s normal schools into colleges by 1917. The regents monitored budgets, approved the building of new structures, and most importantly sought to raise the academic standards by providing broadly accepted teacher training across the state. The Board abolished the general course of study and replaced it with five courses of study: the agricultural course, industrial arts course, science course, language course, and primary and art course (for those wanting to teach below the High School level).

In March 1949, a bill was introduced to the Texas Legislature to create a separate Board of Regents for North Texas State Teachers College. At the time, the school was the largest college in Texas without a separate board. The college attained a new Board of Regents on May 23, 1949, when Governor Beauford Jester signed the bill.

“The Legislature is to be commended in recognizing the progress of

North Texas State College by setting up a separate board of regents.

Liberal arts education, it is impractical to assume that it should

Continue to improve without a separate board for direct supervision.

With a large portion of the population of Texas concentrated within

A 50-mile radius of Denton, the future of this school is unlimited,

Especially with the leadership of its present administration.”

The new board was made up of nine members, two were alumni (Ben Wooten, chair and Grace Cartwright), and one was a holdover from the previous board (S. A. Kerr, Jr., vice-chair). 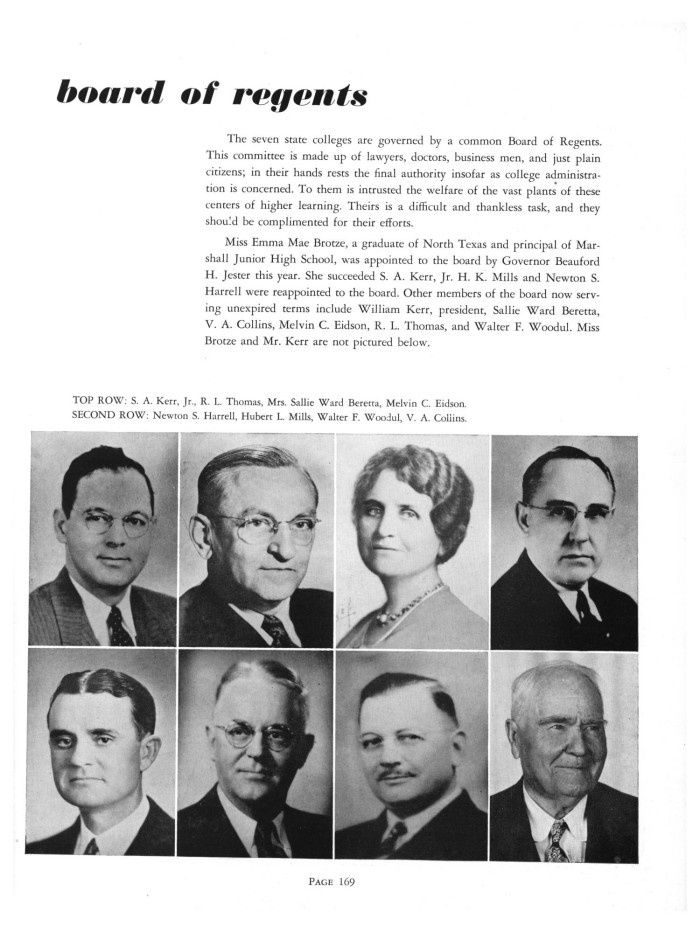 S. A. Kerr, Jr. was appointed to the Board of Regents, State Teachers Colleges in 1943. In 1949, he was “reappointed” to the new North Texas Board of Regents. His presence offered continuity to the new board. Kerr, from Conroe, Texas, was a manager of a Beall Brothers store. He would later operate Kerr Department Stores in Huntsville and Livingston, Texas. He received a bachelor’s degree from Stephen F. Austin State Teachers College and a masters from Peabody College. During World War II he served two and a half years in the Navy, first as a purchasing officer and later as a Lieutenant as a clothing officer for the eighth Naval District at New Orleans.

Edward D. Norment, a native of Paris, Texas, worked in the family insurance business before becoming a regent. He was also the vice-president and director of the First Federal Savings and Loan Association. He was a graduate of the University of Texas and served in the Air Corps as a lieutenant at Kelly Field.

Robert H. Montgomery, a Mexia grocer, formerly worked in the wholesale grain business. Born in Lawton, Oklahoma, he came to Texas with his parents when he was five years old. He attended the Virginia Military Institute and Oklahoma A&M College.

George Eagle, native of Fort Worth, Texas, was a funeral director. He graduated from Riverside High School, but did not have an opportunity to attend college. He served as a Fort Worth city councilman from1937 to 1949. He also served on the Fort Worth School Board from 1932 to 1937.

Charles Robert “Bob” McCrady was a former school superintendent, newspaper publisher of the Waxahachie Daily Light, and at the time of his appointment to the board, a chamber of commerce manager and rancher. He was a graduate of Weatherford Junior College, received his B. A. degree from the University of Arkansas, and did graduate work at the University of Denver, Southern Methodist University, and the University of Minnesota.

James Henry Allison of Wichita Falls, was the vice-president and advertising director of the Wichita Daily Times and the Wichita Falls Record News. He was born at Mount Vernon, Ohio. He worked in newspapers and business, but did not attend college. 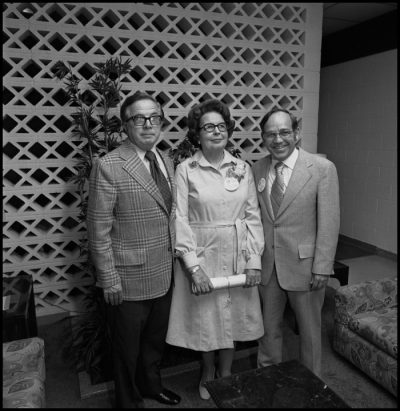 Grace Cartwright, known to her friends as “Amazing Grace,” was an alumna of UNT. She was noted for working to improve the lives of rural Texans. She started by organizing her community in Weatherford to obtain some modern facilities (electricity and phone service were high on her list). She was also involved in clean-up and beautification campaigns and the renovation of the community center. She graduated with a degree in home economics and worked as a demonstration agent in Weatherford for two years before her marriage. 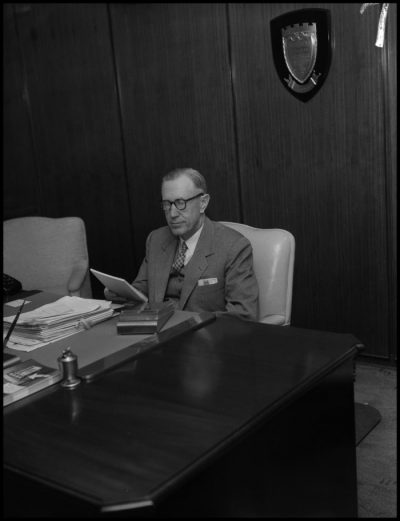 Ben Wooten, the Board of Regents chair, was from Dallas. He was an alumnus of UNT. A World War I veteran, he served as a lieutenant in the Machine Gun Corps. He fought in the battles of Saint-Mihiel and Meuse Argonne and served in the army of Occupation in Germany. He spent his working life as a banker and was active in community groups.

The new Board of Regents held its first meeting on June 4, 1949. The first order of the day was a motor tour of the campus. President McConnell delivered a report providing basic information on enrollment, buildings under construction or completed, bond issues, and other campus concerns. The last part of the meeting concerned the board’s by-laws and the transfer of funds and payment for services.

Two of the members (Ben Wooten and S. A. Kerr, Jr.) of the first Board of Regents would be honored by having buildings named after them on the UNT campus.

Having its own Board of Regents allowed the university to respond to its continued growth in a timely manner. It would also make becoming a System possible as UNT’s service in the North Texas area expanded.