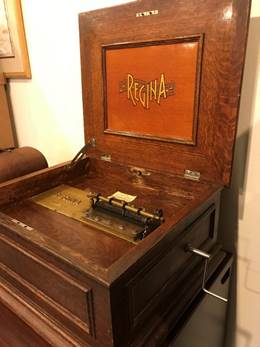 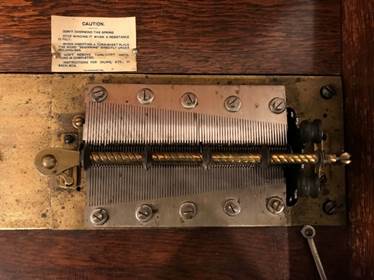 Figure 2. Overhead view of the two combs and arm of the Regina Music Box in the UNT Collection. 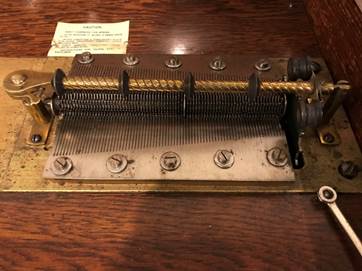 Figure 3. Side view of the arm, star wheel and combs of the Regina Music Box in the UNT Collection. 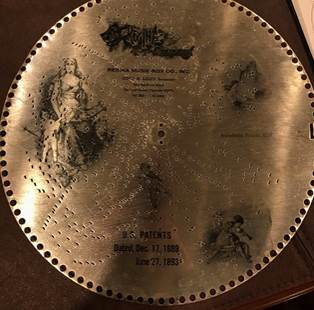 Figure 4. Freischutz, Prayer tune disc from UNT Collection. There are 46 tune discs in this collection. The discs faces vary. Some bear only the title of the song and its patent, while others portray Regina’s trademark and images. Due to use, some marks have been worn away from the discs. 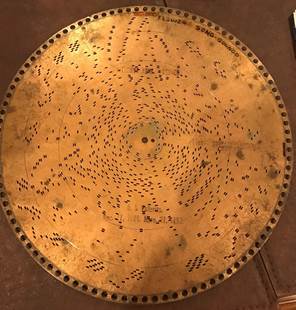 Music boxes are charming devices that play some of our favorite tunes. Perhaps they remind us of an event in our past or recall the person who gave it to us. But music boxes are more than just entertainment or a vessel for personal memories. Each box has its own special origin story and history, which inspire many different types of questions, even scholarly ones. My first question for the UNT Regina Music box was simple: how do I make it play?! After extensive research and multiple correspondences with Alan Bies from the Musical Box Society International (MBSI), I finally heard a full, rich sound emanate from the box unlike any other music box I had ever experienced. Once I overcame this basic obstacle, I began to make more inquiries. My focus soon turned to the listening cultures surrounding these instruments, concentrating on the people to whom the Regina Music Box Company sold their products. To whom was the Regina Music Box Company catering? How did those consumers relate (if at all!) to the types of song discs that the company sold? Regina music boxes originated in Europe and later came to America, so their discs offer a rare glimpse into the changing listening cultures of domestic audiences in Europe and America at the turn of the twentieth century. 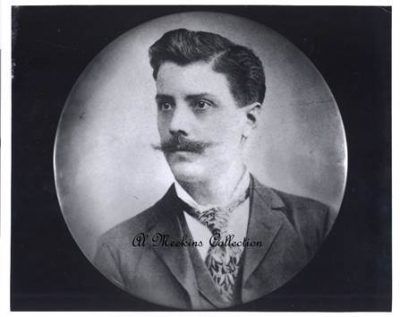 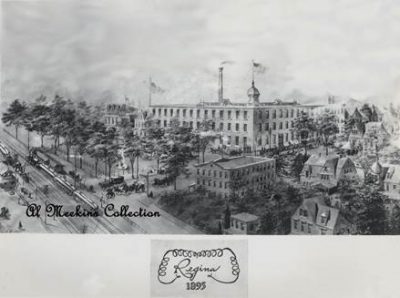 Music boxes and other mechanical instruments have existed for centuries, but the disc musical box did not come to prominence until Paul Lochmann began selling them in Germany in 1886. Soon thereafter many rivaling companies emerged throughout Europe (Tallis 1971, 52-53). An employee of the Symphonion Company in Leipzig, Gustave Brackhausen, saw how successful the disc musical boxes were and decided to bring them to the American market. In 1892, Brackhausen left Germany to start the Regina Company in Jersey City, New Jersey. Once there, he first produced the 15 ½ inch Regina music box which was based on the Polyphon model so that the 15 ½ inch Polyphon tune discs could be used for the Reginas. However, he no longer wanted to rely on European companies for his disc supply. His solution was to have his company make their own discs. He brought Octave Chaillet, a Swiss disc master, to the States to create new discs that featured popular American styles like spirituals and Souza marches to add onto the preexistent European repertoire (Tallis 1971, 52-55). The company was successful, holding 80-90% of the American market from 1892 until 1919 (Gallo 2001, 4). They ultimately created many different types of musical boxes such as the Reginaphone, Regina piano player, Regina Corona, and the Regina Automatic Concerto. 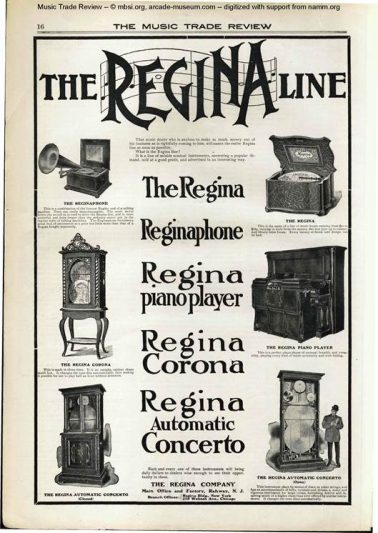 Regina music box advertisements from 1895 to 1905 reveal that the company catered to wealthy white people who either had a family or liked to entertain in their homes. Figure 9 through 11 depict well-dressed men and women socializing. Figure 9 contains many men in tuxedos and women in ball gowns dancing to the sounds of a Regina music box in a lavish salon. The image on the right of figure 10 also depicts a similar scene although in a simpler imagery with the short text of “plays for Afternoon Reception or for Evening Dancing.” The image on the left implies wealth in a different sort of way. A couple lounges on their boat as they listen to their Regina. Figure 11 portrays multiple scenes, some similar to figure 9 and 10 and some different. In the top right corner is once again an image of a well-dressed man and woman dancing and in the bottom left corner is a couple on their boat. This advertisement, however, features more familial images as well. The middle image on the left specifically references Christmas time offering the Regina as the perfect Christmas gift. On the bottom right, children appear in the image dancing to the music of the Regina music box while adults in fine clothing sit by and watch. The middle left image features a woman holding a baby reaching towards the music box with the heading, “even the baby finds entertainment in the Regina music box.” These advertisements indicate the Regina Company’s aspirational customers and anticipated the types of environments and events in which their customers might use the Regina. 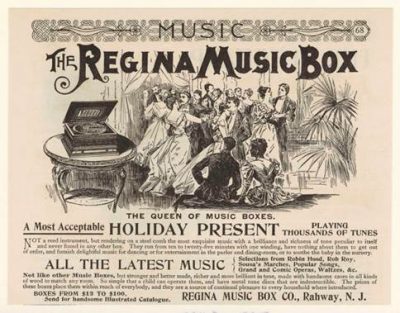 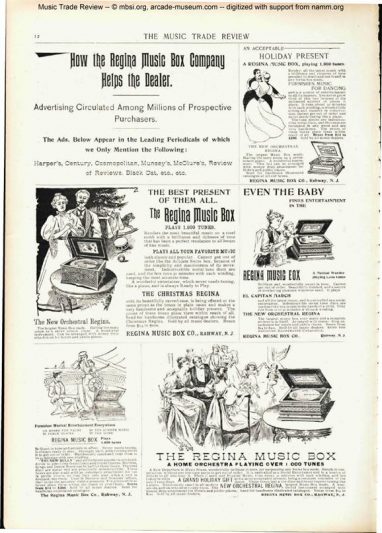 The texts of these advertisements emphasize the quality of the music box: it plays over 1,000 tunes, has indestructible discs and a brilliance and richness of tone, is easy to use, and does not require tuning. One other element that is pointed out is the tunes themselves. Some mention a few popular titles or composers, but most of the advertisements say something like “plays all your favorite music both classic and popular,” or “all the latest music.” Figure 12 provides more detail than the others assuring listeners that, “The Regina Music Box makers keep right abreast of the composers who are continuously writing all kinds of popular music— ‘rag time’ if you want it. And they have provided tune-discs…of all the best music of all composers of all times—the great master-pieces of the Masters.” 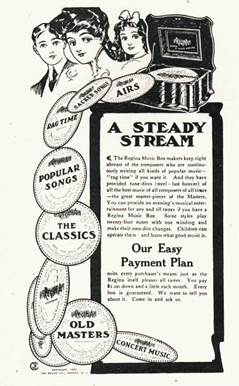 As is evident in the advertisements, popular music and the most recent tunes were emphasized, meaning these were the types of tune discs people in America were buying. A comparison between the genres found in the UNT tune disc Collection and those housed in the National Museum of American History’s collection1 and музея cобрание (Russian Museum Collection)2 shows a clear trend. In the collections from the United States, the number of discs based on American musical genres outnumbers the disc with European musical genres, while in the European collection, European derived music appears much more numerous than American music. 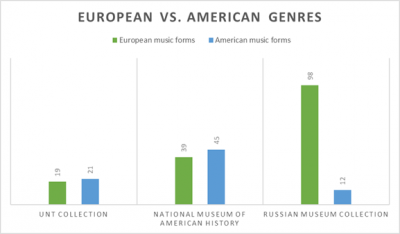 Figure 13. Table comparing the number of European and American music forms found in the tune disc collections from the UNT Collection, the National Museum of American History and the Russian Museum Collection.

However, the divide between European and American genres in both of the American collections (a two disc difference in the first and a six disc difference in the second) do not have the same disparity as the European collection which has an 86-disc gap. Breaking down these numbers further into specific genres provides a better idea of what exactly constitutes part of these American4 and European5 genres. In the American collections, American folk and popular songs outnumber the other categories. European dance music, however, far exceeds all other genre categories in the Russian collection. From this data, I speculate that American consumers very much enjoyed and potentially preferred new American popular genres even as they clung to the fashion and tradition of their European ancestry, while European music box customers preferred their own genres to the American ones. 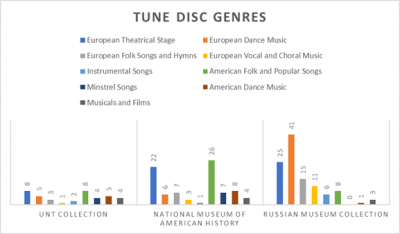 While these findings are based on a very limited pool of data, they offer a preliminary look at trends in the types of music consumed through this medium from the 1890s-1920s. Music boxes have a long and complex history that can offer us a glimpse into listening practices of the past, the technical aspects of mechanical instruments, musical preferences, the art of arrangement, and much more. Perhaps this will inspire you to pull out an old music box and see what types of stories it can tell!

Special thanks to the Musical Box Society International (MBSI) for all of their help.