Today the University of North Texas Music Library is nationally recognized for its scholarly resources and special collections, but just over eighty years ago the entirety of UNT’s music collection fit inside a single storage closet. The music library’s rapid development may be largely attributed to Anna Harriet Heyer, who became the Southwest’s first full-time music librarian in 1940. Heyer served as the founder and head of the music library until 1965 and actively participated in UNT’s musical activities through the early 1990s. She is often depicted as the “isolated pioneer” of music librarianship because she entered the field in its early stages and worked thousands of miles away from other major music libraries, which were concentrated in the Midwest and along the East Coast (Bradley 2007). In a 1991 oral history interview, Heyer even used this term to describe herself, noting how her location made professional collaboration difficult (Heyer 1991). While Heyer was certainly isolated geographically, framing her life’s work in this way sidelines the rich and varied connections that she fostered locally and nationally throughout her career.
I must admit that my own research process began with an isolated mindset, and during my first few visits to the Edna Mae Sandborn Reading Room, where I worked through materials belonging to the Anna Harriet Heyer special collection, I approached her work from the perspective of a solitary individual working more or less alone. My initial objective was to reconstruct Heyer’s process of conceiving, compiling, and publishing her landmark bibliographical work titled Historical Sets, Collected Editions, and Monuments of Music. The more time I spent with the collection, however, the clearer it became that Historical Sets was not the product of an isolated woman on the fringes of her field, but instead a highly collaborative endeavor that included librarians across the globe in sometimes surprisingly personal ways. Following this realization, I became increasingly interested in Heyer’s apparent knack for creating or contributing to communities: at UNT, across her profession, and in her personal life.
A large portion of Heyer’s archival collection consists of her prolific correspondence, and while most of her letters are professional, frequent personal touches and informal slips suggest relationships deeper than strictly business acquaintances. For instance, Heyer’s closest liaisons with the American Library Association, Marion Dittman and Pauline Cianciolo, often commented on the weather, asked after projects unrelated to her book, and celebrated Heyer’s success more enthusiastically than one might expect from professional contacts (Image 1). 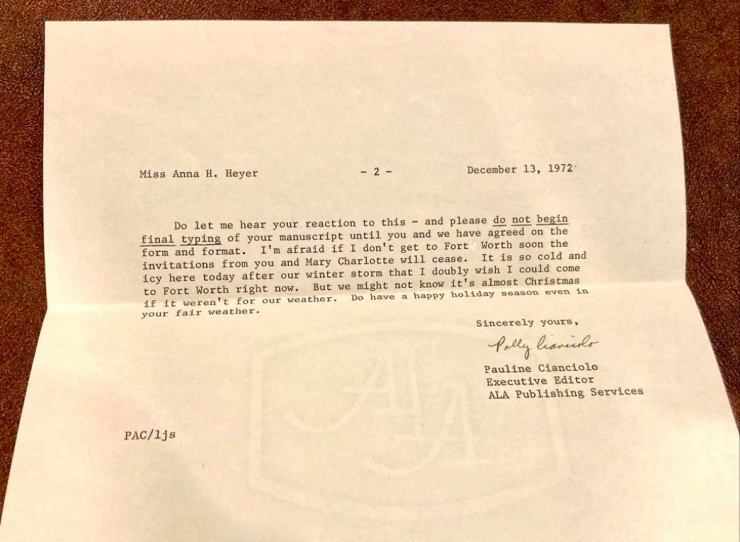 In a letter dated April 22nd, 1969, for example, Dittman invokes whooping Valkyries to congratulate Heyer on the upcoming publication of Historical Sets’ second edition (Image 2). Another business contact, Catherine Miller of Columbia University, also developed a personal relationship with Heyer. At one point the two women discussed collaborating on a manual that would help “isolated” librarians acclimate themselves to the profession; ironically, the physical distance separating them prevented this project from coming to fruition. Nevertheless, Heyer and Miller maintained a regular correspondence, discussing personal and professional matters, and occasionally sharing inside opinions about their field (Image 3). 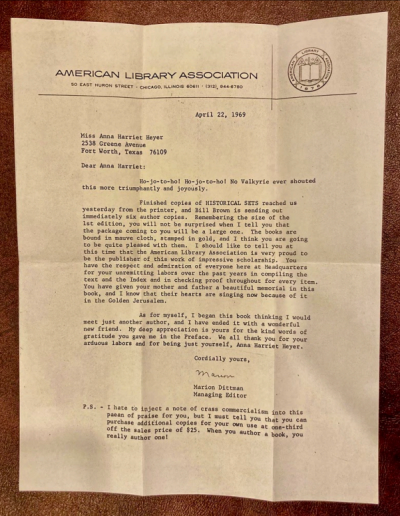 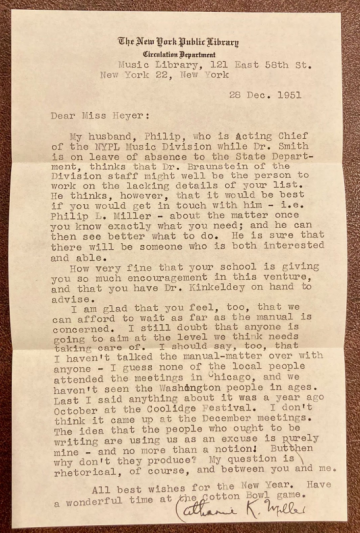 Beyond her inner circle, Heyer’s book generated widespread enthusiasm within music libraries across the United States. Historical Sets sought to provide complete bibliographic information for significant publications of single-composer music collections available in North America, Europe, and parts of Asia. Her project quickly developed a sort of fan club, and in addition to the correspondence that Heyer maintained to gather information about libraries’ holdings, she regularly received friendly letters inquiring after the work’s progress. Following publication, many exuberant librarians sent letters of thanks, including a handwritten postcard from Harriet Nicewonger at Berkeley (Image 4). Another librarian, Margaret Lospinuso, wrote that at UNC Chapel Hill they affectionately referred to Historical Sets as simply “Heyer.” Initially, the book was supposed to become a completed project after two editions, but once the second went out of print, Heyer and the American Library Association received such an outpouring of interest for additional copies that Heyer’s publishing contract was renewed for a third and final update.

Heyer’s community connections to UNT also ran deep, and her library colleagues clearly valued her for more than her professional competencies. For many years, Heyer was the face of the music library, and her skillful guidance in its formative years paved the way for its present-day success. It is therefore no coincidence that events celebrating the music library’s twenty-five year anniversary overlapped with events honoring Heyer’s retirement. Within the Heyer collection, it is sometimes difficult to tell which items are tied to general library events and which pertain specifically to Heyer’s career—the two were practically inseparable in the minds of the UNT music community. Unquestionably the most memorable item that I came across during my research, a custom, Mardi-gras-esque bracelet commemorates Heyer’s years of service and the music library’s active years (Image 5). The engraving on the back of the pendant reads: “Music Librarian, NTSU, 1940–1965.” Although the quality and age of the accompanying photographs make it difficult to tell for certain, I believe that this picture, taken in 1965 at Heyer’s retirement luncheon, captures the moment of the gift’s exchange (Image 6). Following her retirement from UNT, Heyer relocated to Fort Worth but continued her library work by assisting Texas Christian University, her Alma Mater, with its music collection development, much as she had done for UNT. 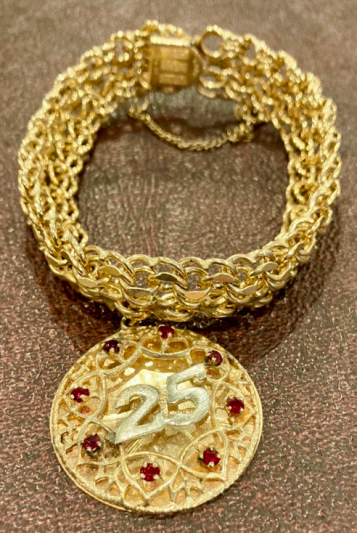 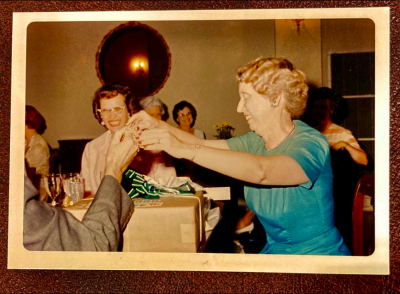 Despite several decades of absence, in 1990 Heyer was again called to serve the UNT music library leading up to its fiftieth anniversary celebration. She wrote a history of the library that appeared in a special fiftieth anniversary booklet, and judging from the numerous outlines found among her papers, she was very involved in curating the exhibits that showcased the library’s holdings (Image 7). As with the twenty-five year anniversary celebrations , Heyer’s name was front and center, even appearing above the library’s on invitations (Image 8). 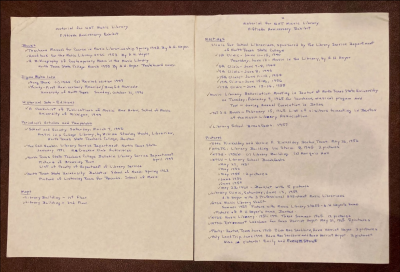 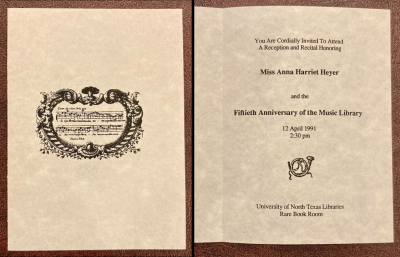 While many of Heyer’s friendships stemmed from professional connections, she also found time to maintain outside interests. She was an avid hand weaver and an active member of the Contemporary Hand Weavers of Texas Association, even serving as their vice president for several years. Perhaps her most tangible contribution to this community was the Index that she complied in 1962. It served as a guide to all articles printed in the Contemporary Hand Weavers’ newsletters between 1949 and 1961, its intent being to help new members quickly locate information relevant to their specific interests (Image 9). The guide’s formatting resembles the second edition of Historical Sets, which Heyer worked on concurrently. In this way, a touch of the professional crossed over to the personal (Image 10). 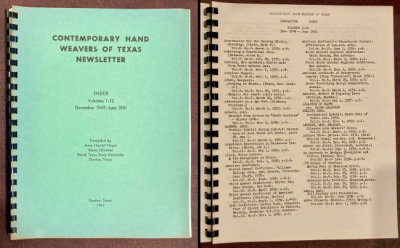 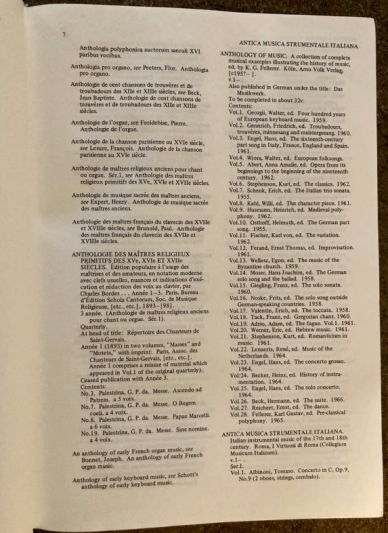 “Isolated Pioneer” may be a fitting title for Anna Harriet Heyer in some contexts, but it does not adequately summarize the profound impact of her life and work. Despite the distance, Heyer connected many librarians across the country as she worked to increase knowledge and circulation of musical materials. Whether local or national, Heyer was an integral and beloved member of many communities, sometimes blurring the line between personal and professional commitments. Heyer’s thoughtful attention to individuals and dedication to realizing group goals are the threads that connect each of her relationships, demonstrating that her strength was truly one of numbers.