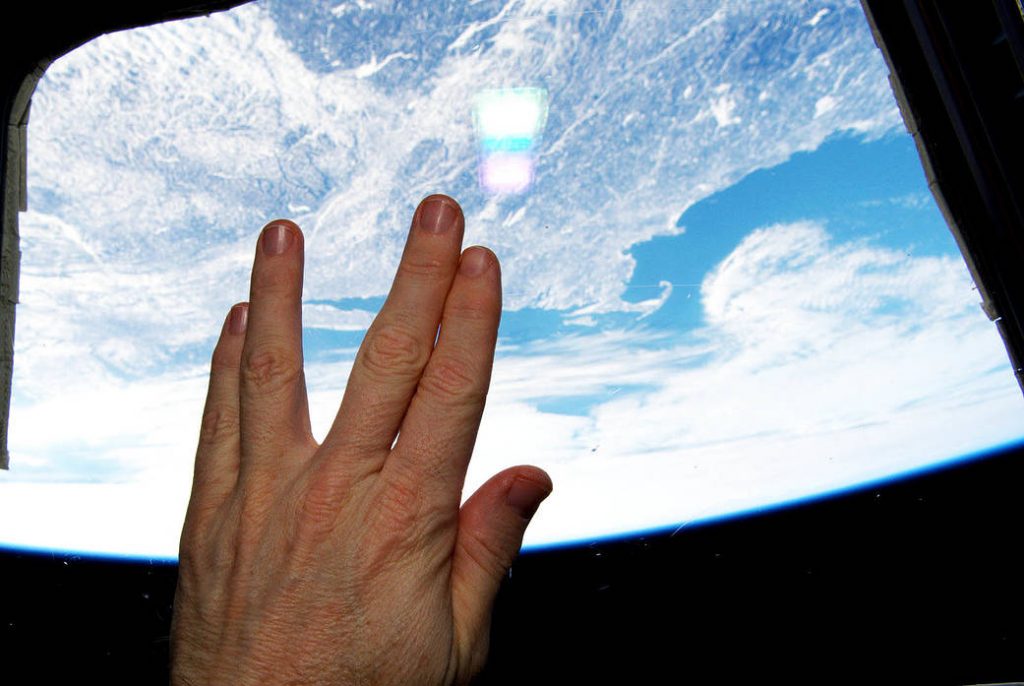 Live Long and Prosper Day has been celebrated on Leonard Nimoy‘s birthday every year since 2017, when it was created by artist Matt McCarthy as a project for Make Up Your Own Holiday Day, also celebrated on March 26. It is a day to contemplate the Vulcan blessing and consider how it might apply to your own life. We would like to take this opportunity to share with you a few U.S. government publications that are related to Mr. Nimoy or to the Star Trek television and movie series, demonstrating how deeply embedded they have become in our American culture and consciousness.

Because of their common theme of space exploration, the National Aeronautics and Space Administration (NASA) has had perhaps the most intimate connection with Star Trek of any government agency. NASA even has a section of its Web site dedicated to the relationship between NASA and Star Trek and, on the 50th anniversary of the show’s final episode, published an article detailing 50 Years of NASA and Star Trek Connections.

The first NASA space shuttle was called the Enterprise, named after the Star Fleet’s most famous ship in response to a letter-writing campaign from fans of the television show. The Star Trek cast and crew even visited NASA’s Dryden (now Armstrong) Research Center for a photo opportunity when the Enterprise was rolled out.

In his article The Science of Star Trek, NASA scientist David Allen Batchelor explores various features of Star Trek according to how scientifically accurate or inaccurate they are, and comments upon whether various of the show’s inventions are feasible or, in some cases, have already been achieved.

Wonderful Inventions: Motion Pictures, Broadcasting, and Recorded Sound at the Library of Congress is an anthology of essays providing a taste of the varied holdings in the Library of Congress related to movies, television shows, radio programs, and recordings of music and the spoken word. The entire book is full of fascinating anecdotes and trenchant technical analyses, but one essay in particular is essential reading for Star Trek fans: Music for Star Trek: Scoring a Television Show in the Sixties is a first-hand account of how the soundtrack music was created for the three seasons of the original Star Trek series. Written by Fred Steiner, one of the eight composers who worked on a total of thirty episodes, the essay provides not only a detailed, insider’s account of how the music for each episode was composed, it also gives a lucid account of the complex process of scoring a typical television show in the 1960s. The essay is enhanced with photographic stills from the show and excerpts from the scores themselves, including a facsimile of the famous main title fanfare and theme composed by Alexander Courage.

Speaking of the main title, did you know that the music has lyrics? According to a blog post by Reference Specialist Paul Sommerfeld, producer Gene Roddenberry was concerned that the show would not be financially successful, so he wrote words under Courage’s melody and submitted this version of the score to the Copyright Office, listing himself as lyricist. This bit of legal subterfuge guaranteed that he would collect 50 percent of the proceeds every time the them song was performed in public, even if the words were not sung, but it also guaranteed that the composer would be bilked out of half of his earnings.

Here are a few examples of Star Trek–themed realia owned by the Smithsonian:

Immediately following the beloved actor’s death on February 27, 2015, there were many tributes and reminiscences shared by those who were inspired by his achievements both on and off the television and movie screen. U.S. Representative Adam B. Schiff submitted his personal Tribute to Leonard Nimoy to the Extensions of Remarks section of the March 2, 2015 Congressional Record.

On another occasion, Star Trek co-star William Shatner testified before Congress about the tinnitus he suffered after a “routine explosion” on the Star Trek set damaged his hearing. Shatner mentioned in his testimony that Nimoy was on the opposite side of the explosion and was also adversely affected by it.

Centers for Disease Control and Prevention

Like so many Americans, Leonard Nimoy started smoking as a teenager because he thought is was “cool,” then he became addicted. He eventually gave up smoking when his first grandchild was born, but by then his lungs were permanently damaged, and eventually he passed away from chronic obstructive pulmonary disease (COPD). His family arranged for Leonard’s story to be told online through the CDC’s Tips From Former Smokers® campaign.

We hope you have enjoyed these stories about Leonard Nimoy and Star Trek, and we invite you to celebrate the day by sharing your own plans, reminiscences, or experiences. How has your own life been affected by Star Trek?