O’Neil Ford (1905-1982) was born in Pink Hill, Texas, a small community near Denton. When his father died at an early age, the young Ford took it upon himself to support his family, so he went to work as an adolescent. Ford loved to draw and showed an interest in architecture from the beginning. Later, when it came time to pursue his interest as a career, he enrolled in North Texas State Normal College.  O’Neil attended the school for two years until he was no longer able to afford tuition and went to work at a local diner, Dyche’s Corner, on Avenue A, where he flipped burgers while earning his certificate in architecture through a correspondence school in Pennsylvania.

Ford had a flair for selling himself, which manifested itself through struggle in the early years and providing for his family in the absence of his father. This talent served him well once he began his practice as an architect. Ford would go on to become one of the most accomplished and noteworthy architects in the state of Texas.

Ford led the planning for such buildings as The Little Chapel in the Woods on the Texas Woman’s University campus in 1939. This structure was typical of the kind of work O’Neil Ford did throughout his career and it spoke much about his philosophy on architectural structures and their practical use. Ford’s other projects included the Tower of the Americas (1968) in San Antonio, First Christian Church (1987) in Denton, Texas Instruments (1958) in Dallas, the Civic Center Complex (1963-1968) in Denton, the Selwyn School (1967-1968), Trinity University (1963-1971) in San Antonio and the Gazebo (1928), on the North Texas State Teachers College campus, now known as the University of North Texas.

In 1928, the same year the Gazebo was built between what is now the Auditorium Building and the Language Building, Ford’s bandstand was built, which was an open air theater constructed in the art deco or neo-classical style of the time. The bandstand was located in what was then known as Eagle Park and it shared space with the swimming pool area. The bandstand only lasted for about twenty years when the structure was demolished to make way for the Journalism Building, which later became Scoular Hall. During its existence, the bandstand served as a stage for musical performances and was also part of the Eagle Park Projection Booth area, where students, faculty and staff could watch films during recreational time.

A World War I memorial tower of Ford’s was planned on the North Texas campus also but lack of funding during World War II resulted in the plans for its construction, along with a student union, to be abandoned. The only remaining structure of Ford’s on the University of North Texas campus is the Gazebo, which also incorporated a fountain at one time.

O’Neil Ford had lifelong connections with the city of Denton and his study of the Courthouse on the Square during his youth stimulated a lasting interest in architecture. Ford recalled the building as fascinating him to the point of wondering how it was ever constructed even years later.

In 1978, North Texas State University honored O’Neil Ford with the distinguished alumnus award. He is remembered for his influence on the Texas architectural landscape and for helping to shape modernist architecture throughout the state, even though some of his structures, such as the Eagle Park bandstand, did not survive. 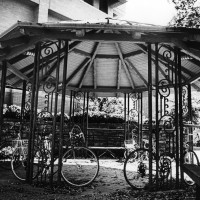 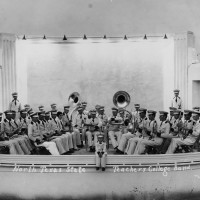 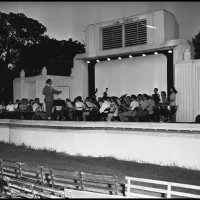 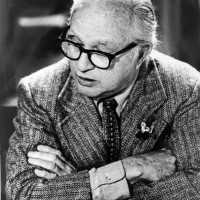