Fifty years ago UNT’s Oral History Program began capturing the stories of the “man on the street” in their own words, giving voice to those that are often neglected by history because they are less likely to leave a written record. The program is celebrating its 50th anniversary throughout 2015 by posting audio clips and photos highlighting important portions of the collection. The goal of the program is to “preserve, through recorded interviews, the memoirs of Texans who have been eyewitnesses to or participants in historic events,” and to make transcripts of these oral interviews available to scholars and the general public.

It all began in 1964 when H.W. Decamp called the first organizational meeting, with the intention of preserving the recollections of Texas politicians and business leaders. By 1968 the leadership was taken over by Dr. Ronald E. Marcello, a History professor, who started expanding beyond the original scope, to include those who served in World War II, New Deal projects participants, and memoirs of Holocaust survivors. Dr. Todd Moye, another UNT History professor, took over in 2005 and continued to expand the scope of the collection.

In 2015 the collection includes more than 1,800 oral histories consisting of 150,000 pages of transcribed oral interviews not just from the original areas, but expanding to include local African American, entrepreneurial, LGBTQ, women’s, and community history. Some of the highlights in the collection include: 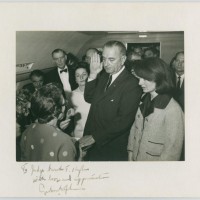 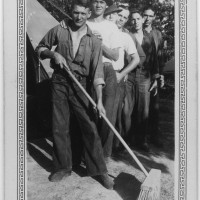 Connie McCann’s C.C.C. tent crew pose with their cleaning supplies for a photograph in Pineland, Texas. The man in the rear of the line workers is John Hennesy George, a friend of Connie F. McCann. The photograph was taken during one of McCann’s two six-month tours in the Civilian Conservation Corps located in Pineland, Texas during the Great Depression and shows a typical CCC scene as described in numerous reminiscences captured in the Oral History program. 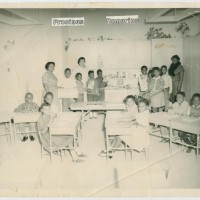 Photograph of a classroom at Fred Moore School in Denton around 1961-62. The adults are identified as Miss Eva Courtney (a volunteer) at the far right, Jewel Logan (another volunteer) at the far left, and the teacher, Lucille Nix. Several of the students are also identified: Drucilla Kimble (back right, wearing a plaid jacket), Archie Hicks (standing behind Drucilla), Joyce Young (seated at the far right), Shiela Bell (seated at a desk in the middle front), and Gwen (standing in front of Miss Nix on the left). The Fred Moore School was named for a well-known Denton African-American educator. This image was digitized as part of the North Texas History Harvest, held November 2, 2013 at the MLK Jr. Rec Center in Denton, Texas. 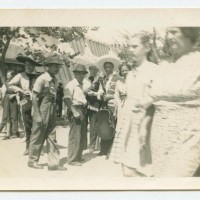 This photograph shows a woman and girl walking through Denton’s Quakertown as a large group of men look on. The racial tension is reflected in a number of the reminiscences of Quakertown residents. 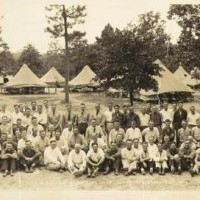 This panoramic group photograph of members of the Pineland Civilian Conservation Corps (CCC) camp in 1933 shows a typical CCC camp as described in numerous reminiscences captured in the Oral History program. The photograph was taken during one of Connie Ford McCann’s two six-month tours in the Civilian Conservation Corps located in Pineland, Texas during the Great Depression. 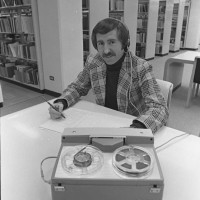 UNTA_UO458-147-4748-01 Dr. Ronald Marcello, a UNT History professor who was in charge of the Oral History Program from 1968 to 2005 at a table on the third floor of Willis Library demonstrating the use of the reel to reel recording equipment in January of 1975. 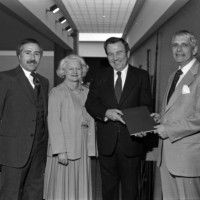 UNTA_U0458-147-4807-23 Dr. Ronald Marcello on the left with Texas Senator Oscar Mauzy, second from the right, along with several other people, celebrating the completion of the 500th oral history added to the collection in January 16, 1981. Senator Mauzy, a Democratic senator from Dallas, has 12 interviews in the collection discussing his role in the 60th through 68th Texas Legislatures.