The University of North Texas has had several name changes since it was established in 1890. However, when it was known as North Texas State University, it experienced a cry out for social change at a high level among the student body especially around the 1960s. The country was surrounded by images and discussions about the Vietnam War, the draft, inflation, The Civil Rights Movement, Women’s Rights, the death of Martin Luther King and many other events that called out for a response and many did respond by going into the streets with picket signs.

The Vietnam War occurred from 1954-1975. It was discussed in every major and local newspapers and news stations around the United States. It was greatly opposed by the American citizens, especially the youth.

Moratorium Day on the NTSU campus, was much the same as at other schools. Many of the participants at NTSU gathered in front of the Government-Sociology Building located between the present day Sage Hall and Sycamore Hall to hear speakers. The day began with a peace mass attended by 200 people and was followed by a teach-in, a noon rally and a forum that a crowd of about 600 persons attended to hear a five minute speech. The forum provided the opportunity for open discussion of the issues involved in the Vietnam situation. It offered students, faculty and administrators a place to publicly air their views. At the end of the day, a torch light parade, ended the observance, however, the parade ended with 10 students arrested by police. The parade had obtained a police permit to march around the campus but about 100 to 125 students decided to march to the downtown area where police ordered them to disperse. Most did, but police arrested the 10 students that refused to move on. The 10 arrested students were released without charge and it was the only major difficulty during Vietnam Moratorium Day demonstrations.

Not all anti-war demonstrations ended so peacefully. On May 4, 1970 at Kent State University, 9 students were injured and 4 were killed by the Ohio National Guard. The Kent State shootings, also known as the May 4 massacre or the Kent State massacre occurred when students at Kent State protested the Cambodian Campaign announced by President Richard Nixon during a television address on April 30, 1970. The unarmed college students protesting and others who were observing the protest from a distance were fired on by guardsmen.

The outcome of this event was felt across the nation and further affected the public opinion over the role of the United States in the Vietnam War. In memory of the four students killed at Kent State, a group of nearly 100 NTSU students marched to two campus flagpoles and lowered the flags to half-mast. The marchers wore black arm bands and carried black flags along with four black coffins, one for each of the students. The group planned another march to the National Guard Armory in Denton, Texas.

The former president of North Texas State University, Dr. John Kameriek, who worked at Kent State for 12 years, as dean and vice president, appealed to the NTSU government. During a ten minute meeting, he asked the students to seriously contemplate the action they might take as a result of the Kent event. He offered an alternative to the march planned for Wednesday. He suggested a memorial observance at 11 am Thursday in the campus main auditorium with classes dismissed. Dr. Kamerick urged the students who wished to march to the armory in Denton “to at least apply for a parade permit, even if you don’t receive it,” because they have not obtained the permit. Following the meeting, the students voted on the matter. By morning, the students obtained a parade permit, issued by the Police department to Lawrence Ferrell of the United Students of North Texas. The next day, students marched to National Guard Armory, located several miles away from campus, holding handmade signs of the first names of the students killed at Kent State University.

Unrest and anger about injustices done to others were becoming the norm around the world as well as on the NSTU campus. Members of the Students for a Democratic Society (SDS), The Afro-American Student Union (AASU) and The  protested the police brutality by the Denton Police. Brad Young, a freshman at NTSU, claimed he was struck by police Sergeant Cecil Aaron, during an altercation at the police station. Young went voluntarily for an interrogation. Once news of Young’s altercation spread, many supporters headed down to the station. They marched without incident and many carried signs charging police brutality. Outside city hall the demonstrators formed a huge circle denouncing the police. They gathered in a parking lot adjacent to the police station, protesting the striking of the young Dallas student. Sergeant Aaron was suspended and reprimanded but later returned to active duty. Some Members of the Ex-Marine Association and several fraternities counter demonstrated in support of the Denton Police.

Many went to the streets with signs that expressed their dissatisfaction with an issue, but others took matters into their own hands and chose to express their dissatisfaction to an issue in an illegal way. In 1969, arsonists set fire to two buildings on campus. The first was set in the gymnasium in the Men’s Building, currently being used as the ROTC armory. The fire spread to the roof of the gymnasium before it was brought under control. Less than 24 hours before the ROTC armory arson, the Texas Christian University armory was also set on fire by arsonists. It was determined that both fires were arson but it was unclear if the two were connected. The cost of the damaged structure at Texas Christian University was estimated around $5,000 to $6,000. The cost of the damage to the NTSU structure was initially estimated at $11,600, but that amount was later raised to $27,000. There was speculation the fires were connected to the work of anti-ROTC agitators training in universities and colleges across the nation, however, there were protests against ROTC programs on both campuses.

Not all marches were about protesting a wrong done to someone or group, some were about showing respect to individuals who stood against injustices. Dr. Martin Luther King Jr. was the leader of the Civil Rights Movement, which brought many races together and brought issues of inequality to the light in the 1960s. Dr. King was assassinated in 1968. His dream and his work inspired many on the NTSU campus. Many wanted to honor King and pay tribute to him and keep his dream alive. In front of the Administration Building, the flag was lowered to half-mast and below was a wreath of white carnations with the inscription “In Memory of Dr. Martin Luther King.” A quiet crowd of 1,750 students, faculty members, administrators and religious leaders carried their handmade signs, and portraits of Dr. King, gathering at the Union building to begin a memorial service. The marchers, who walked four and five in row, stretched more than four blocks long at one point during the march. As the march progressed, more students joined their ranks. When the afternoon ended, the group, led by a motorcycle policeman, marched peacefully around the campus chanting “We Shall Overcome.” Arthur Smith, who was president of the AASU, told the crowd at the memorial service that Dr. King’s death was a national tragedy and that they were paying their respect not just for the man but for the cause for which he died. His speech was followed by a recording of Dr. King’s “I Have a Dream” speech and ended with a shout of “Black Brothers and sisters together now and forever.” The tension was relieved when Marvin Peterson, a trumpet player, told the crowd, he really loved them all. Peterson played his arrangement of “Brotherhood.” The procession march stopped in front of the half-raised flag at the Administration Building and all present said a silent prayer for Dr. King.

Sir Isaac Newton quoted “for every action, there is an equal and opposite reaction,” that statement rings truest around the world and on the NTSU campus during the 1960s. 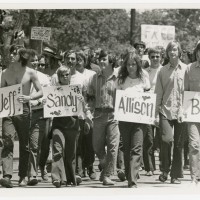 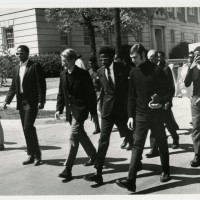 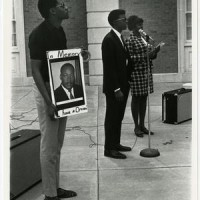 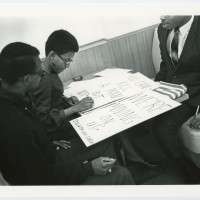