Audie Murphy was born near Kingston, Texas in 1924 and enrolled in the military on his eighteenth birthday in 1942. During his lifetime he received every medal of valor which the United States can bestow, appeared in 45 motion pictures (acting in a starring role in 39 of them), and wrote a best-selling book which was later turned into a successful motion picture.

It is not surprising that Murphy appeared frequently on in WBAP newscasts. Murphy made frequent appearances in Dallas and Fort Worth to promote his films and participate in Texas Amy National Guard events. Considering his dual status as war hero and movie star, he had many reasons to be recognized. In honor of Audie Murphy Day (May 12, 2018) we are highlighting several of the broadcast news scripts from the WBAP archive which mention Murphy. Unfortunately, none of the film footage related to these scripts has been digitized and it remains in its original 16mm film format . Please contact UNT Special Collections if you would like to sponsor digitization of original news footage featuring Audie Murphy.

The marriage of Audie Murphy to airline attendant Pamela Archer in Highland Park in 1951 is the first recorded instance of Murphy in the WBAP archive.
News Script: War-hero wedding, April 24, 1951 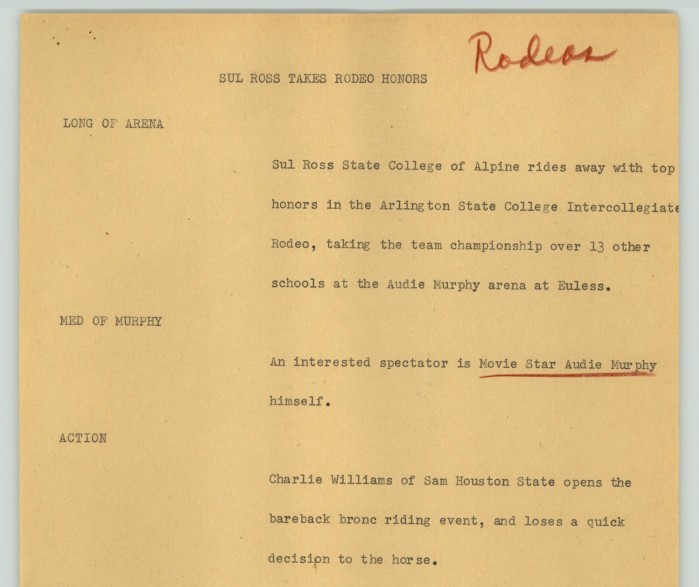 Several weeks later, Murphey made another local appearance, this time with several other well-known Western movie stars include Gene Autry, Pat Butram and Dorothy Malone. The appearance, at the Palace Theatre in Dallas, was part of a benefit performance for victims of the Waco-San Angelo tornado.
News Script: Stars, May 24, 2018

In 1950, Murphey joined the Texas Army National Guard as a captain of the 36th Infantry Division. He participated in Guard activities as a drill instructor during new recruit summer camps. He appeared on the news during the first week of camp on July 5, 1953 as Texas Governor Allen Shivers inspected the troops at Fort Hood.
News Script: Shivers reviews 36th division, July 5, 1953

In 1955, Murphy made an appearance in Dallas to promote a new movie To Hell and Back, based on the best-selling autobiographical work written by Murphy about his wartime experiences. He played himself in the movie.
News Script: News briefs, August 19, 1955

The WBAP news crew caught Murphy again in 1962 as he was flying into Love Field for a short trip to Dallas. Murphy told the news that he would be “just loafing, playing golf, and visiting with friends,” during his trip. Murphy had just completed filming for a western called Six Black Horses. Murphy was also having his portrait painted by artist Dimetre Vail.
News Script: Audie Murphy , March 12, 1962

Murphy made an appearance in Fort Worth in 1967 alongside Congressman Olin “Tiger” Teague, where he talked to over two thousand high school students attending an event at TCU. Following the event, Murphy, who was 42, was reported to have been “swamped” by girls seeking autographs, while Congressman Teague and the other speakers stood aside
News Script: Tiger Teague. January 27, 1967

Murphy was tragically killed on May 28, 1971, when a private plane on which he was a passenger crashed into a mountain in Virginia. Murphy was buried with full military honors at Arlington National Cemetery. The Audie Murphy American Cotton Museum in Greenville, Texas contains exhibitions of Murphy-related memorabilia, and is home to the Hunt County War Memorial featuring a 10-foot bronze statue of Murphy. KXAS News covered the opening of the Audie Murphy Museum in 1987.
Audie Murphy Museum, January 21, 1987 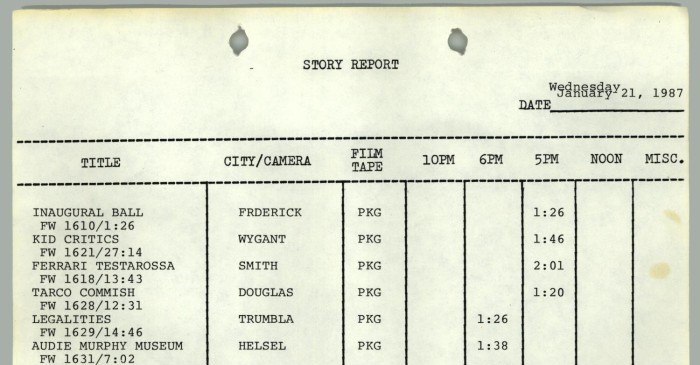