The UNT Media Library began its exploration of UNT’s Hollywood history with a look at one of our first motion picture stars—the lovely and talented Joan “Rosebud” Blondell. Though the Media Library is certainly proud to claim Joan as one of our own, we now turn our attention to another alumna who, unlike Blondell, spent her formative years in Denton and seemed to never lose touch with her hometown. We are, of course, speaking of our beloved glamour girl Clara Lou “Ann” Sheridan (1915-1967).

Born in Dallas and raised in Denton, TX, Clara Lou attended North Texas State Teacher’s College (now the University of North Texas) from 1932-1933. Though she only attended NTSTC for one year she was an active participant in university life and left her mark on the community. While at NTSTC, Ann performed with the university dramatic club, sang in Kiwanis Minstrel shows, and was locally famous for her “Harlem torch song” style as performed in Floyd ‘Fessor Graham’s Saturday night stage shows. Ann was surprised to learn she’d been discovered after her sister, Kitty Sheridan, entered her in Paramount Studio’s international “Search for Beauty” contest in 1933 (sponsored locally by the Palace Theater and Dallas Journal). Another North Texan, Alfred Delcambre, was also a winner.

As part of her prize, Ann had a bit role in Paramount’s 1934 film, Search for Beauty. In 1935 she changed her name to ‘Ann’ and continued to act in mostly minor roles, struggling to make her way in Hollywood. Ann’s luck began to change in 1936 when she signed with Warner Bros. Studios. By 1938 she had landed her first starring role in an A-list picture, Angels with Dirty Faces opposite James Cagney, Humphrey Bogart, and Pat O’Brien. It was around this time that journalist Walter Winchell and Warner Bros. head of publicity Bob Taplinger began referring to Ann as the “Umph” or “Oomph Girl”—a nickname that was awarded to her by a jury of 25 men and which Ann reportedly loathed all her life. Denton residents remained loyal to their girl Ann and claimed that they had discovered this “oomph” quality back when she performed her torch songs on stage with Fessor Graham. In fact, a 1939 Campus Chat article reads: “Red-aired Ann Sheridan even then, had that indefinable something that commands male interest. Oomph!”

While in Hollywood, Ann never forgot her hometown and classmates. In August 1939, NTSTC students were treated to a special sneak preview of her latest film, The Angels Wash Their Faces. At the peak of her fame, in 1940, our local newspapers announced that Ann and Warner Bros. Studios would sponsor the “Denton Glamour Girl Contest.” First announced on February 14, 1940, The Campus Chat reported that Ann was sponsoring a contest to find the most glamorous girl in Denton County. Any girl aged 16-26 who lived in Denton County or attended one of Denton’s two colleges was eligible to participate. The winner would be awarded gifts from the local sponsors including a $200 wardrobe from downtown department store H.M. Russell and Sons Co., beauty treatments from Woodford’s Beauty Salon, a round-trip train ticket to Hollywood paid for by Texas Consolidated Theaters of Denton, and a screen test at Warner Bros. Studios. Runners up would be awarded a one-month’s pass to Theater Row, a box of nylons, and a permanent. Denton residents were encouraged to vote repeatedly and earned these precious voting coupons by making purchases with sponsors. In an effort to keep the contest fair, students from TCSW (now TWU) (Helen Solberg), NTSTC (Lloyd Williams), as well as Denton High School (Maurine Stegal) were selected to monitor the month-long voting process.

In February and March 1940 participants campaigned in the local and university papers and readers were encouraged to vote for their favorite glamour girl. NTSTC selected freshman Betty Ann Fladger as the university’s official candidate. Fladger, who worked for The Campus Chat, later served as the First Lady of Denton (1959-1962) and owned the Varsity Shop His & Hers Boutique in Denton with her husband. Texas State College for Women (TSCW, now TWU) selected sophomore speech major Beryl Ann Longino to be the university’s favored candidate. By the end of the contest, the top 10 finalists were*:

During the tense last week of the contest, Frank Dewar of Warner Bros was in town making preparations for the contest’s conclusion and ad campaigns intensified. On March 19th the 10 finalists took the stage of the Texas Theater on Elm Street in downtown Denton (now the unoccupied Fine Arts Theater). As a token of gratitude for their participation, the Texas Theater would be allowed to hold the Southwestern premiere of Ann’s next film, It All Came True. Audiences at the Texas as well as the Palace and Dreamland theaters (the other two theaters on Elm Street or “theater row”) waited as the winner was announced…Beryl Ann Longino of TSCW! Audiences listened to an amplified telephone conversation between the star and the winner. Beryl Ann was subsequently in high local demand as a model and she worked at the Fair Store in Fort Worth as well as the Marlin’s Texas Blue Bonnet Photo Fiesta. By 1942 Beryl Ann (later known as “B.A.”) had settled in New York where she pursued a full-time modeling career. She later attended the University of Texas at Austin and married United States Senator Lloyd Bentsen.

Throughout the 1940s, the relationship between Ann and the University remained strong and residents were fiercely loyal to their hometown girl. In 1940, Dr. J. L. Kingsbury of the university’s State Historical Collection announced plans to open a “museum of the theatre” centered on Sheridan. A prize would be offered to the contributor of the most nearly complete Sheridan photographic collection. The Denton Record Chronicle reported on April 01, 1940 that in response to a Harvard Lampoon article that named Ann as the actress most unlikely to succeed, students had hanged the Harvard Lampoon in effigy. As reported in the DRC, the comedic event began with university athletes holding a “tree strike” until Ann’s name was vindicated. They eventually came down from the tree after persuading economics professor and Harvard alumnus Dr. Conrod to apologize “in the name of Harvard.” Students waived six-shooters borrowed from the State Historical Collection while others dressed in boots and sombreros hung the effigy. Ann reciprocated in 1942 when she was making a personal appearance at a theater in Wyoming and invited two ex-NTSTC faculty stationed in Cheyenne to join her. Rudolph Fuchs (Art Department) and Kenneth Hunt (Library) joined Ann and her personal secretary Gwendolyn Woodford (Ann’s classmate from Denton) for some photographs and a social visit. By the 1950s Ann’s career began to decline with fewer and less acclaimed roles. One of her last successful pictures was opposite Cary Grant in I Was a Male War Bride (1949)—the first film ever to be screened at Denton’s Campus Theater.

Back in 1939, The Campus Chat reminded Denton residents to remain proud of their hometown star Ann Sheridan “for few small town girls have gone farther faster than she.” The UNT Media Library therefore honors Ann, the girl who kept Denton glamorous, and recommends the following titles available for checkout at the Media Library: Dodge City (1939), They Made Me a Criminal (1939), King’s Row (1942), The Man Who Came to Dinner (1942), Thank Your Lucky Stars (1943), and I Was a Male War Bride (1949). Further titles starring Sheridan are available for check-out at the Denton Public Library.

After viewing some of Ann’s films, check out the Ann Sheridan Collection held by UNT Special Collections. The collection was reportedly donated by Ann’s relative and Denton resident Ora Lee Sheridan Paschall.

Share your own Hollywood Memories!
If you or someone you know has any additional information about Ann Sheridan’s time in Denton or the 1940 Glamour Girls of Denton Contest, please contact the Moving Image Preservation Librarian, Laura Treat, and be part of Denton’s Hollywood history. 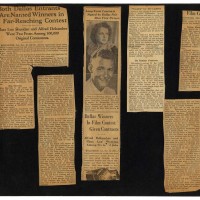 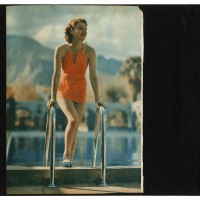 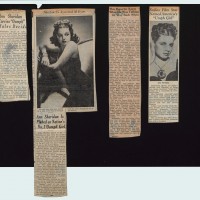 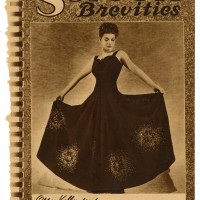 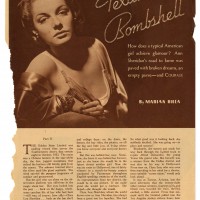 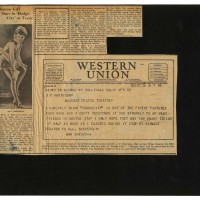 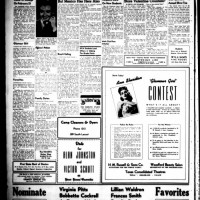 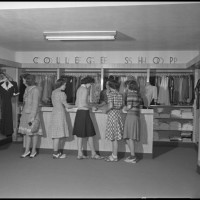 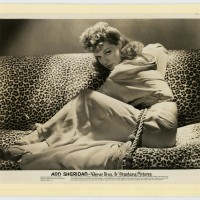 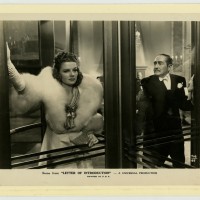 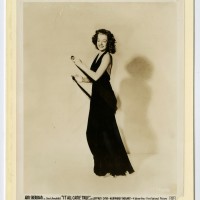 * The following is a more complete list of the women participating in the Glamour Girl Contest as of 03/01/1940 along with their university affiliation and other information when known.