An aerial shot of our beloved US Interstate 35. As we hover over, we notice that it’s rush hour and there are at least 5 vehicles on the interstate. The bustle bursts through the screen. PAT BOONE’S signature smooth voice addresses the audience.

This is Pat Boone and you’re about to get a glimpse of my alma mater, North Texas State University.

PAT BOONE introduces the film and later JOHN SWANEY will narrate through the duration of the film. JOHN SWANEY is a national debating champion and fellow NTSU alumnus. Together, their voices will accompany images of NTSU. The campus is bright and inviting. The students look studious, eager to learn, and they move from building to building with purpose.

During the 1960s two movies were filmed in Denton, but only one was meant to highlight, “…student life in classes, social activities, athletic events and dormitories.” This film would eventually become, The Story of North Texas State University. The idea for this film came about during a United Students of North Texas Senate meeting when the suggestion for something other than a typical photo-based promotional project. The idea quickly gained backing from various organizations with an estimated production cost of $300. Once the USNT senators began asking around, they found their initial estimate needed to be reevaluated. After talking to both freelance and professional companies, the financial burden came into better focus with costs ranging from $3,500 to $10,000.

Things looked grim and hopes for a promotional film being made began to wane. That is until two alumni and current employees of the WBAP-TV television news station came into the fold. Cameraman Robert Welch and Editor Doyle Vinson offered to shoot a 28-minute promotional movie on 16mm film for $800. The USNT senate quickly met to vote on the acceptance of the offer and once accepted, the pieces began to swiftly fall in place. The advisory board for the film comprised of Dr. James L Rogers (Director of the News Service), Dr. A. Witt Blair (School of Education), and Dr. Stanley K. Hamilton (Speech & Drama) and shooting began during the 1962 University Day celebrations which included the burial of the now unearthed time capsule. Filming progressed throughout the beginning of the fall semester and moments like freshman registration, orientation and counseling and a Slab Dance were captured. Production kicked into full gear by October after securing Pat Boone and John Swaney to lend their vocal prowess to the film and Welch continued to roll film at events like the Angel Flight, the USNT Senate, and intramural football games.

In May 1963, the film finally began post-production with Vinson and Welch ready to cut the film with plans to include the film in a promotional panel to be presented at high school career days in the area. The final product can be seen here and the result is a little slice of NTSU/UNT life that depicts exactly what it set out to capture. In between established shots of buildings and events there are shots of students looking anxious during registration day. The crowd of students fanning themselves during orientation. One student is shown waking up from what appears to be an impromptu nap in a study space. It’s an interesting yet familiar look into what life was like on campus in 1962. 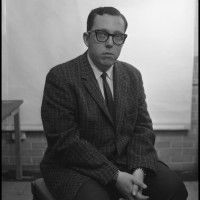 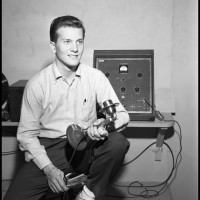 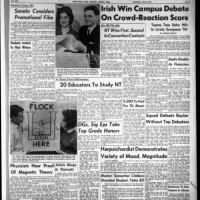 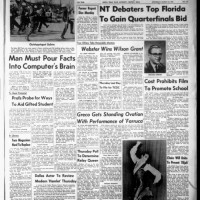 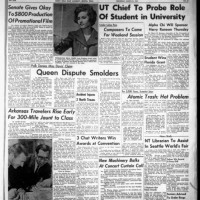 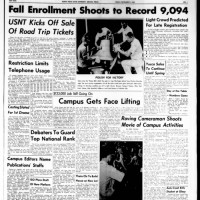