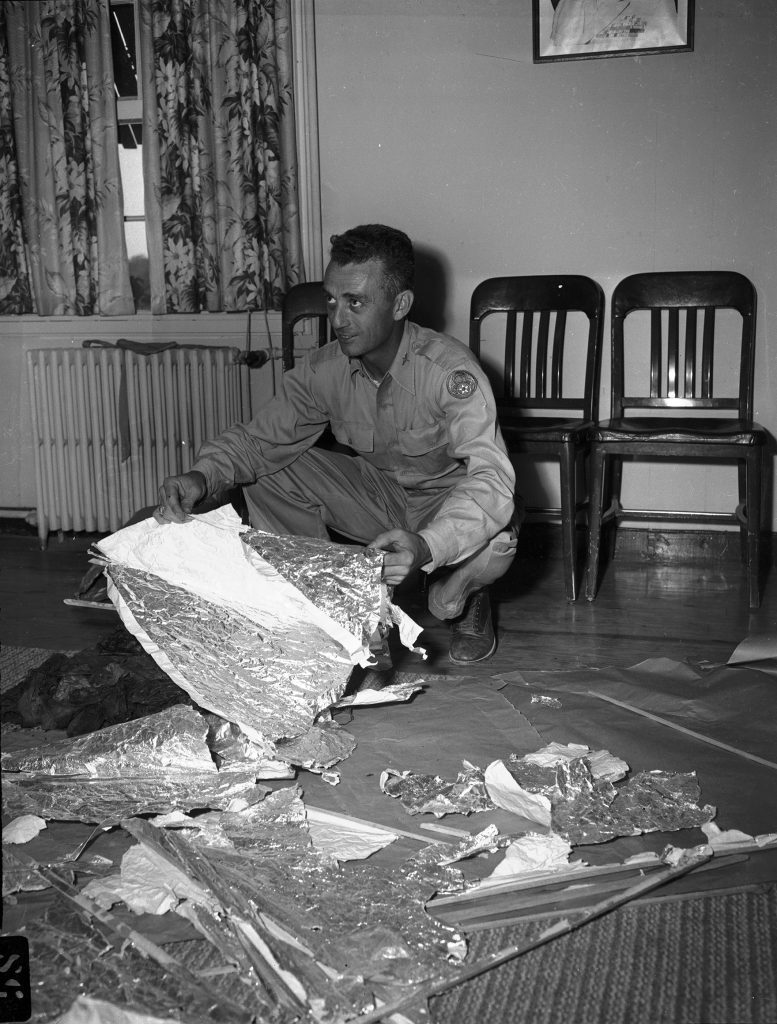 For many Americans today, the name “Roswell” will inevitably conjure up images of flying saucers crash landing in the remote New Mexico desert; bald, diminutive aliens with gigantic eyes; and bizarre theories about government conspiracies and cover-ups. The events of 75 years ago have spawned books, movies, and TV shows, and the so-called “Roswell Incident” has attained the status of an American myth. To celebrate the 75th anniversary, here is a brief look at some of the many government publications available in Sycamore Library and on the Internet that provide insight into this intriguing story.

In 1947, beginning in the spring and continuing into the fall, a rash of sightings of unidentified flying objects (UFOs) were being reported across the United States, with the maximum number of these sightings occurring during the period from mid-June to early July.

On July 7, 1947, while interest in UFOs was at its height, W.W. “Mac” Brazel appeared at the office of sheriff George Wilcox in Roswell, New Mexico and described the wreckage of a metal disk and some other materials, including tinfoil, broken wood beams, strips of rubber, and thick paper, which he had discovered a few days earlier on the Foster Ranch where he worked, about 75 miles northwest of Roswell. Brazel had heard stories about UFO sightings on the radio recently and wondered if the debris he found might be part of one of those “flying saucers” everyone was talking about. 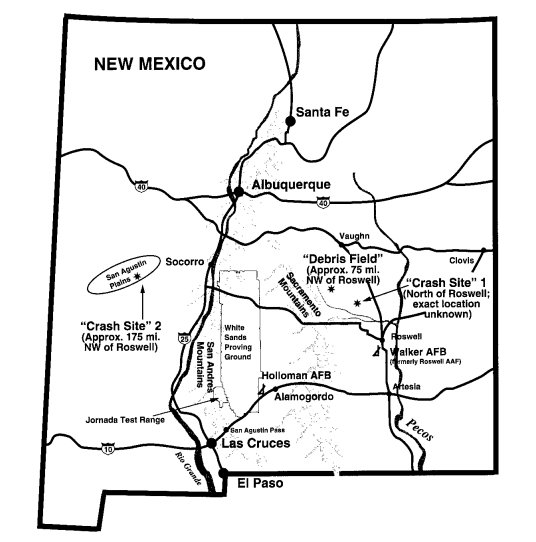 Sheriff Wilcox contacted Major Jesse A. Marcel, an officer in the Roswell Army Air Field (RAAF) intelligence office, about Brazel’s discovery. Marcel drove to the sheriff’s office to inspect the wreckage, then went out to the ranch with Brazel to collect as much of the debris as they could.

The next day, July 8, the Public Information Office issued a press release, prematurely announcing that the Army Air Force had recovered a “flying disk.” The news media went wild, for this was perhaps the first time the government had ever taken reports of alien aircraft seriously.

Meanwhile, military police were sent to the sheriff’s office to collect the wreckage, which was flown to Eighth Air Force headquarters in Fort Worth (later known as Carswell Air Force Base) for inspection. Officers and staff in Texas determined that the objects were remnants of a weather balloon and its attached metallic radar target.

A few hours after the previous announcement, the RAAF issued a correction, announcing that the debris found at Foster Ranch was from a weather balloon, not a flying saucer. Immediately suspicion was aroused that the government was covering something up.

Years later it turned out there had indeed been a cover-up, but it had nothing to do with aliens or flying saucers from outer space.

On July 8, 1947, the Dallas Office of the FBI issued a one-page teletype summarizing the Roswell incident. This document relays information from the U.S. Air Force that a hexagonal object appearing to be a “flying disk” had been recovered in the desert near Roswell, New Mexico. The object was described as being attached by cable to a balloon about 20 feet in diameter, resembling a weather balloon. Because of the interest generated by the recent UFO sightings, the disk and balloon were transported to Wright Field in Ohio for examination. 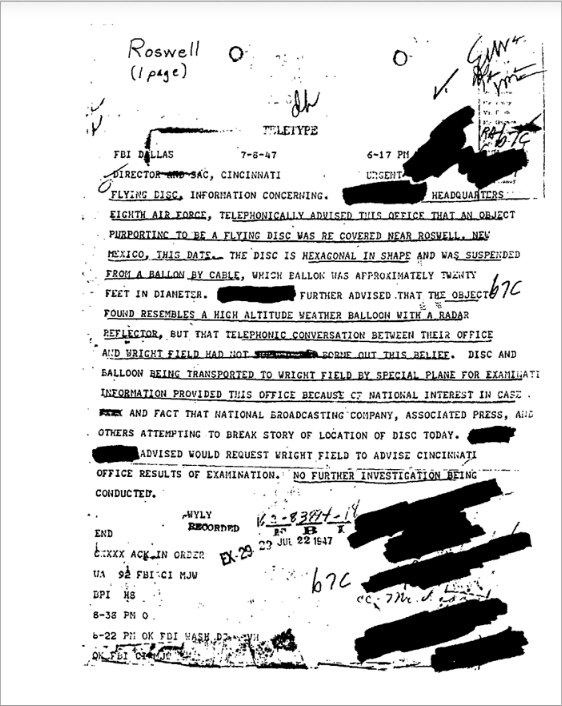 This document is available on the FBI website in their FOIA library known as The Vault. Several more FBI investigations of UFOs conducted from 1947 to 1954 are also included in The Vault.

From 1947 to 1969, a total of 12,618 sightings of UFOs were collected and investigated by the U.S. Air Force. The project, known as Project BLUE BOOK, was headquartered at Wright-Patterson Air Force Base in Dayton, Ohio.

As a result of several private and governmental investigations and studies conducted during this time period, the members of the Air Force running Project BLUE BOOK reached the following conclusions:

On December 17, 1969, the Secretary of the Air Force announced the termination of Project BLUE BOOK. The documentation collected is now in the possession of the U.S. National Archives, and anyone with any further testimony regarding UFOs is referred to one of the many private agencies and individuals that are currently researching such phenomena.

The following blog posts provide more information about records in the National Archives pertaining to UFOs:

In early 1987, British UFOlogist Timothy Good claimed to have been given a highly classified government document indicating that a secret committee of senior U.S. officials called the “Majestic 12” had investigated, and then covered up, the 1947 discovery of a crashed flying saucer containing the bodies of four humanoid aliens. 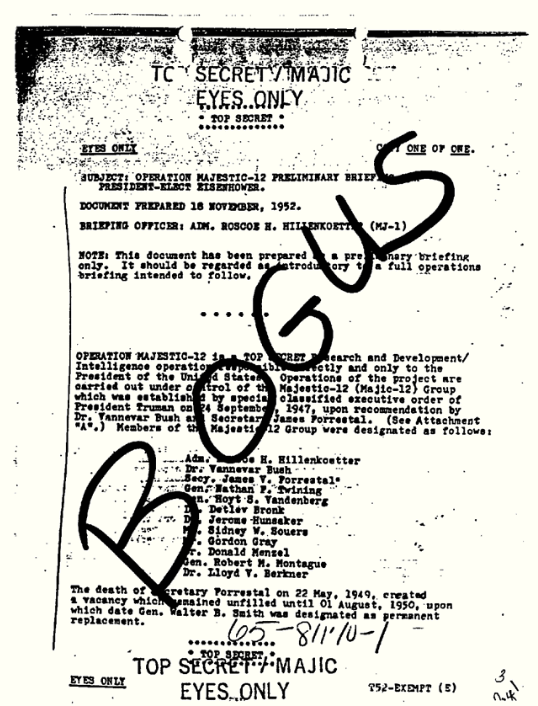 In February 1994, the General Accounting Office (GAO), acting on the request of Steven H. Schiff, a New Mexico Congressman, initiated an audit to attempt to locate any government records connected with the Roswell incident, and to determine if those records had been properly handled according to established procedures for reporting air accidents.

An extensive search ensued for government records related to the crash near Roswell, and a wide range of classified and unclassified documents dating from July 1947 through the 1950s were examined. These records came from numerous organizations in New Mexico and elsewhere throughout the Department of Defense, as well as from the Federal Bureau of Investigation (FBI), the Central Intelligence Agency (CIA), and the National Security Council. 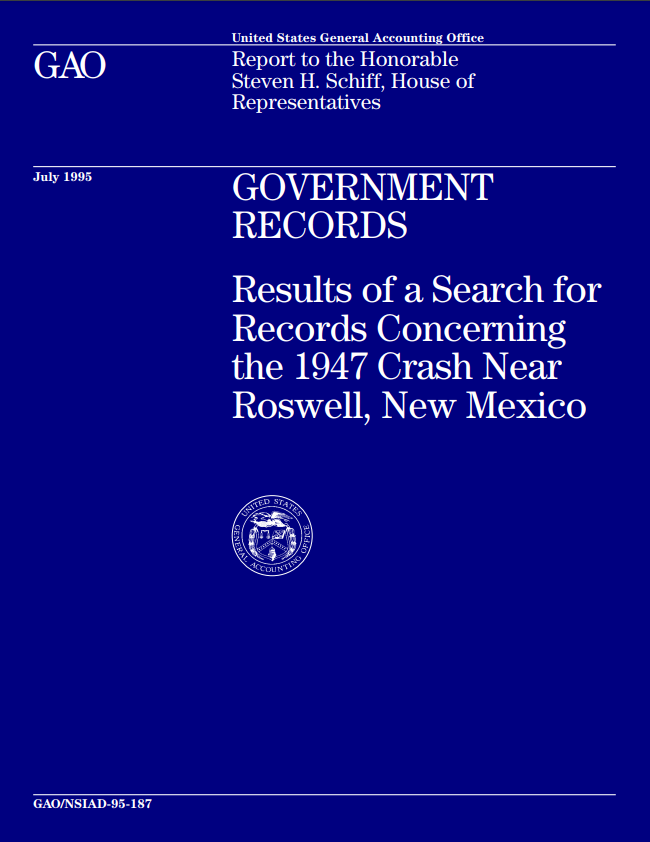 The findings of GAO were published in July 1995 in a brief report entitled Government Records: Results of a Search for Records Concerning the 1947 Crash Near Roswell, New Mexico, and the information that GAO had requested from the U.S. Air Force relating to Roswell was published in a separate, much longer document entitled The Roswell Report: Fact and Fiction in the New Mexico Desert.

These were the findings of GAO:

In July 1994, the Office of the Secretary of the Air Force concluded an exhaustive search for records in response to the General Accounting Office (GAO) inquiry about the “Roswell Incident.” After reviewing its records, the Air Force concluded that the debris recovered from the ranch on July 7, 1947, was a weather balloon, but it was not being used strictly for weather purposes. In early 1995 the results of this inquiry were published in a document nearly 1000 pages long, entitled The Roswell Report: Fact vs Fiction in the New Mexico Desert. 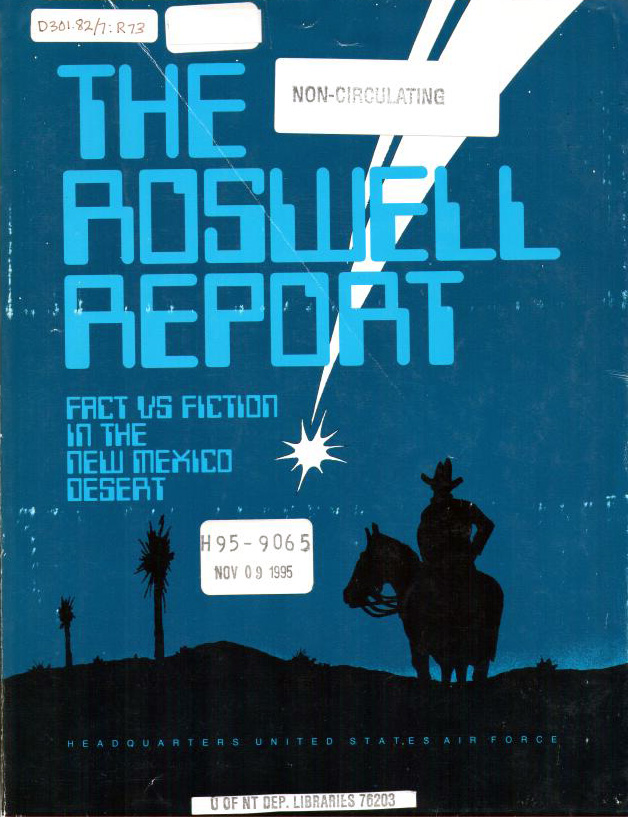 An examination of now declassified technical and progress reports revealed that the Air Force had been conducting an experimental, top secret balloon project, called by the code name Project MOGUL, at the nearby Alamogordo Army Airfield (now Holloman AFB) during the summer of 1947. The Air Force admitted in the 1990s that they had been using this project to develop and test a surveillance device designed to fly over nuclear research sites in the Soviet Union and spy on them.

Project MOGUL was a then-sensitive, classified project, whose purpose was to determine the state of Soviet nuclear weapons research. This was the early Cold War period, and the U.S. government was concerned about the possibility that the Soviets were secretly developing an atomic weapon behind their closed borders. As early as 1945, Dr. Maurice Ewing of Columbia University had proposed to General Carl “Tooey” Spaatz (supervisor of the bombing of Nagasaki and Hiroshima) that a connected string of high-altitude balloons equipped with microphones could be sent floating over the Soviet Union to pick up sound waves and monitor any attempts by the Soviet government to test their own atomic weapon.

The weather-balloon story put out in 1947 had actually been a cover for this top secret spy operation, but only after the documents had been declassified in the post-Cold War era could the true cover-up finally be revealed.

The 1995 Roswell Report dealt only with the material recovered from the first reported incident near Roswell, which had occurred in 1947.

In the decades after the Roswell Incident there were many more reports of UFOs, including two more that occurred near Roswell. Some of these new reports mentioned alien bodies that had been discovered among the crash debris. These bodies were not a part of the original reports of 1947, so they were not discussed beyond a brief mention in the Air Force’s report, but at some point dim memories and inaccurate retellings had caused the various reports to become mixed up and conflated, so that the original 1947 incident was associated not just with the idea of a flying saucer landing in the desert, but also with rumors of dead aliens and more government cover-ups. In 1995 there was even a film released of an alleged “alien autopsy” that took place in connection with the 1947 crash.

In order to respond to these later allegations, the Air Force published a 1997 update to their 1995 report. The update was confidently titled The Roswell Incident: Case Closed. Together, these two reports provide the definitive U.S. Army statement on what really happened during the Roswell incident. 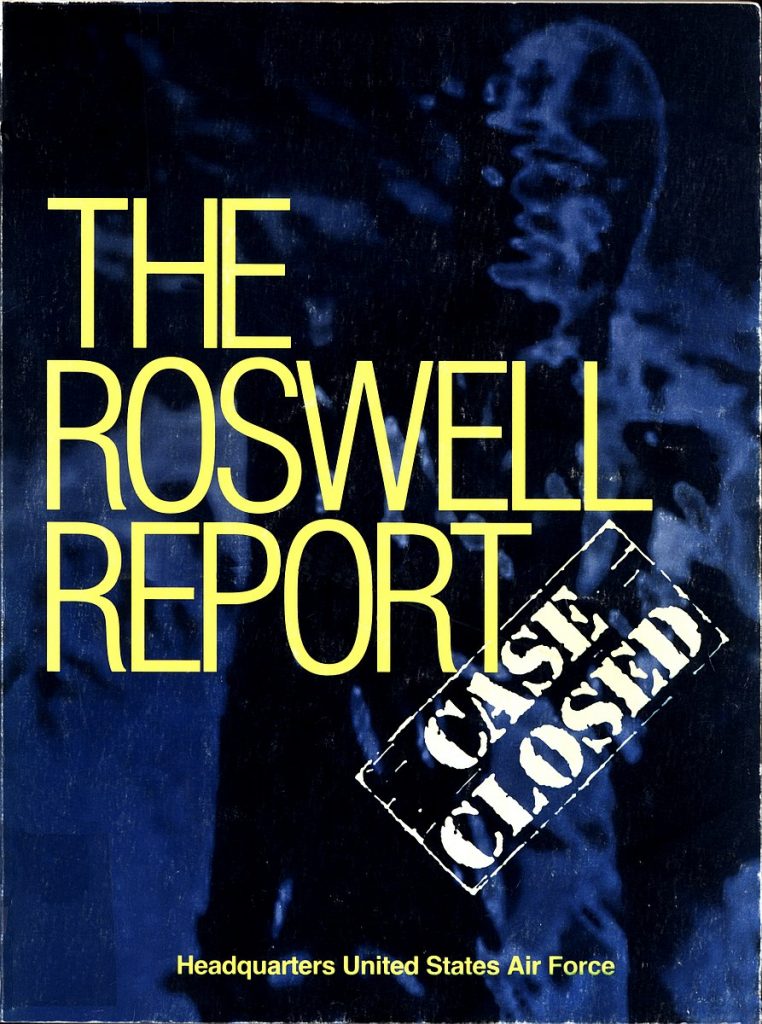 In the final report, which celebrates its 25th anniversary this year, Air Force researchers investigated reports of alien bodies, and concluded that in every case there was a logical explanation much more mundane than treating them as evidence of the misadventures of extraterrestrial visitors. In almost every case, the fantastic stories collected by UFO theorists and enthusiasts proved to be misinterpretations—intentional or inadvertent—of actual operations and tests carried out by the U.S. Air Force in the 1950s. In some cases, the “alien” bodies were in reality anthropometric test dummies, sometimes damaged, used in scientific experiments involving high altitude balloons. In other cases, there were real bodies, but they were human Air Force personnel who had been injured or killed in the line of duty, not creatures from outer space.

In the public eye and in the popular media, UFOs have come to be associated primarily with “flying saucers” and other visits from extraterrestrial beings. For the armed forces and other government agencies, an unidentified flying object (now more likely to be referred to as “unidentified aerial phenomenon,” or UAP) is thought of as a matter of national security, and is more likely to be an airplane, drone, or other espionage device controlled by a member of an enemy government on Earth. This may not be as sensational as a visit from outer space, but it may be closer to the truth.

If you would like to check out any of these publications, or explore these and other government publications, visit us in person at Sycamore Library, give us a call at (940) 565-2194, or send us a message at govinfo@unt.edu.