This is a project update on the Broadcast Script Digitization Project.

One of the major challenges in preservation of early news footage is that it was largely recorded without any soundtrack.The earliest news film in the NBC5/KXAS (WBAP) collection is completely silent, and was meant to be accompanied during a live broadcast by a news anchor reading from a prepared script. In many cases the scripts which originally accompanied the news film have been lost to time, any only the silent footage remains, completely lacking in any contextual information as to what event are taking place. Even the most basic information, such as the date or place the film was recorded, is gone forever. Footage out of context may be interesting, but can be challenging, if not impossible, to use for research.

Luckily, the NBC 5/KXAS Archive contains an almost comprehensive broadcast script library which matches the the daily news film recorded on 16 mm film. There are hundreds of thousands of pages of scripts in the collection which recorded dates, places, and most importantly, description of the events taking place on the mostly silent film. It is from these scripts that we are able to determine that a woman seen stepping off an airplane at Carter Field in Fort Worth is a survivor of Andrea Doria shipwreck in 1956, or that a particular reel of film which is labeled only with a date actually contains footage of desegregation protests in Dallas.

Since our understanding of the film portion of the collection is so dependent upon the information contained within the script library, for the past year archivists and librarians at UNT have been engaged in digitizing the entire script series.We consider this an important first step in the eventual digitization of the entire collection. You can follow along with our progress on the Script Digitization Project by viewing scripts which we have already made available on the Portal to Texas History. As of December 2016 we have nearly completed digitization of the first decade of scripts, raging in date from 1951-1960. 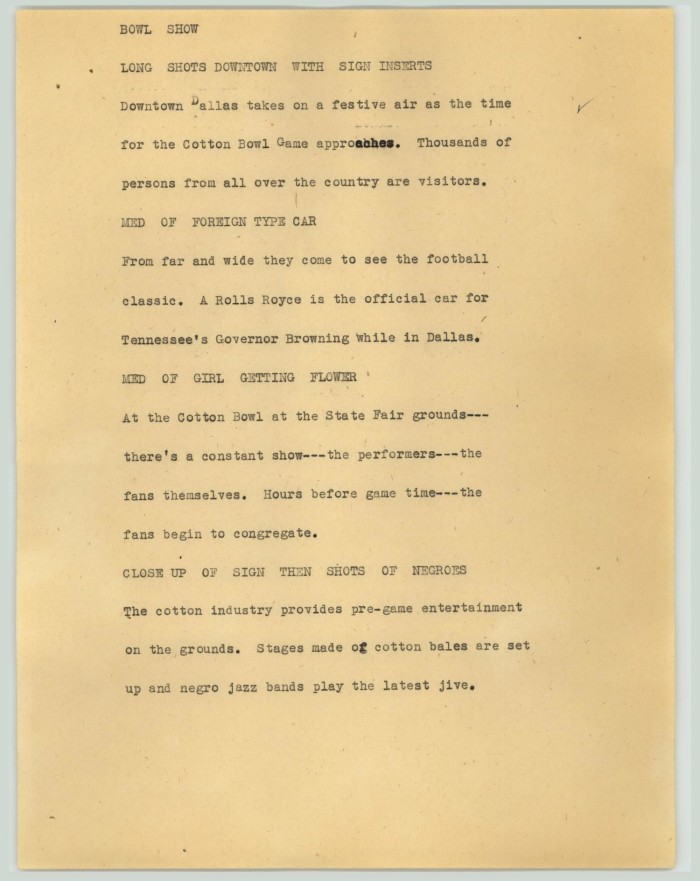 The Statler Hilton Dallas Hotel, located at 1914 Commerce Street, was considered an iconic example of modernist design when it opened in 1956. It was the first hotel built in Dallas in over 30 years, and the largest conference facility in the South. When it opened the hotel had 1,001 guest rooms and a ball room which could accommodate 2,200 people. This historic hotel had many “firsts” in the hotel industry. It was the first hotel to feature elevator music and the first to include a television in each guest room. Celebrities, dignitaries and other VIPs visiting the hotel could also easily be accommodated by a heliport on the roof of the hotel which served as a shuttle to local airports.

The once opulent hotel entered a period of neglect in later years, and was closed permanently in 2001. In 2008 the building was recognized by the National Trust for Historic Preservation as one of the most endangered structures in the country. Inclusion on America’s Most Endangered Historic Places List indicates the significant status of the building, and in general “highlights important examples of the nation’s architectural, cultural and natural heritage that are at risk for destruction or irreparable damage.”

This clip from the NBC5/KXAS Television News Archive features exterior and interior shots of the Statler from the first year of its operation in 1956. The short segment, which aired August 12, 1956, covers an address by Vice-President Richard Nixon to an annual meeting of the Veteran’s of Foreign Wars Association. Although the images of the Statler are tantalizing brief, they do provide a great example of this historic building in action during its heyday.

Main entrance to the hotel (still image from film): Conference attendees near the entrance to the Embassy Room inside the hotel (still image from film): Bellman carrying luggage into the hotel (still image from film): 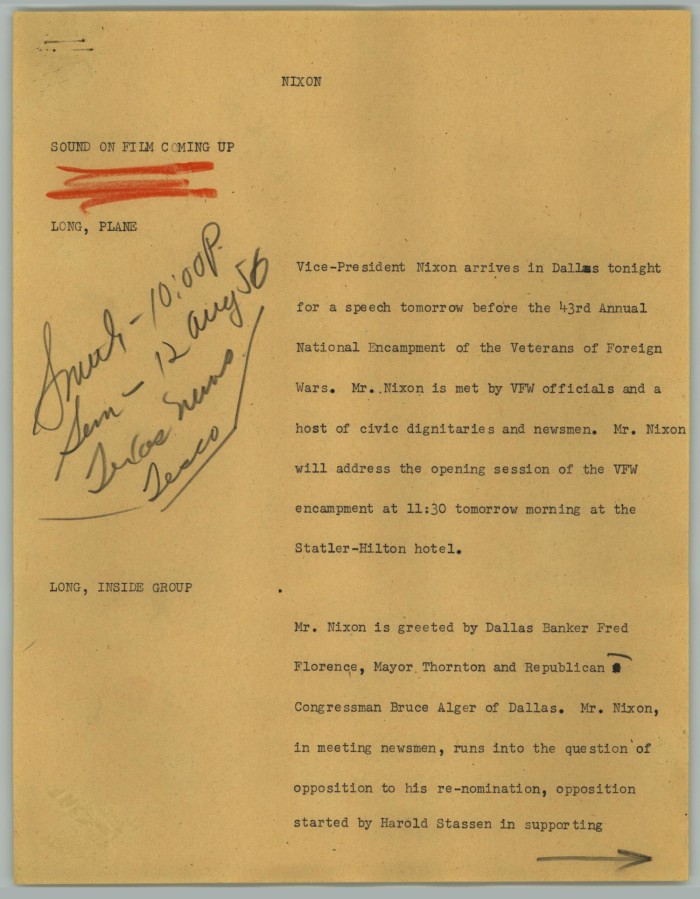 As one of the premier hotels in Dallas for several decades, the Statler Hilton is featured in many news segments which have yet to be digitized. In fact, coverage of the hotel began in 1953 during the groundbreaking of the hotel and continued for decades as celebrities visited and major events took place at the hotel. News footage like this can support historic preservation efforts in many ways– both by documenting the history of a structure and its importance to the community it served. However, unlike other types of historical sources of information, only film footage like this can show you the ways in the ways in which everyday people moved, interacted and enjoyed these structures, and it provides a whole different perspective than a newspaper report or even a still image.

This footage was digitized from the original 16mm news film and is made accessible to the public through the Portal to Texas History.

One of the most interesting aspects of a local news collection is that the coverage provides a regional perspective for national news events. On December 2, 1999 the Mars Polar Lander was quickly approaching the Martian atmosphere in preparation for a landing which would send significant scientific information back to Earth. Scientists hoped that data gathered from the lander would tell us more about the red planet, and maybe even help us to understand if Mars could one day support human life.

This news event was covered nationally and internationally, however, local coverage in the KXAS collection makes a connection between this far away news event to something much closer to home. On December 2, KXAS reporters went to Fort Worth’s Noble Planetarium and talked with Assistant Director Linda Krause. Krause explained that the Mars Lander, much like the planetarium itself, led to many people’s interest in space. First opened in 1955 as a part of the Fort Worth Children’s Museum, the Noble Planetarium was the first public planetarium in the DFW region.

Unfortunately contact with the Lander was lost shortly after it touched down on Mars. As a follow up story, KXAS broadcast a short package featuring animations from NASA as well as short sound bites from NASA administrative officials and the White House. In contrast to the local coverage provided four days earlier, this package featured voice over and stand-up from a NBC Washington correspondent Steve Handelsman, and no specific local coverage was provided.