You know, there aren’t that many Halloween movies out there. There’s thousands of horror films, but most of them have nothing to do with the actual Halloween holiday. With Halloween approaching us, what better way to celebrate than to give you 6 Halloween movies you should watch this year! All of these films are available to check-out at the Media Library. 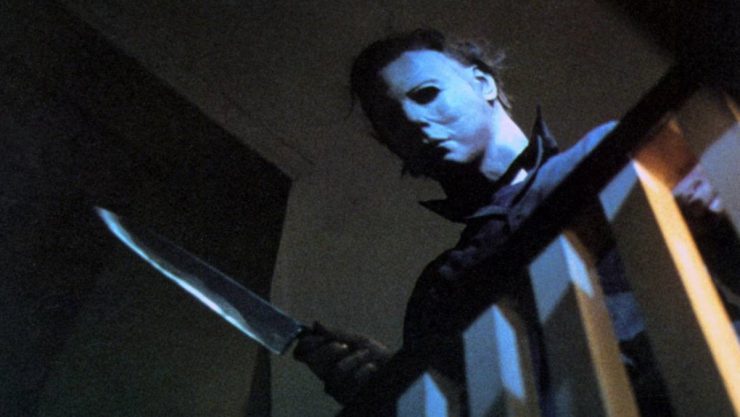 John Carpenter’s 1978 horror classic opened the door for slasher movies and has inspired the creation of other slasher villains such as Jason Voorhees. After 40 years, the movie still holds up today. The low-budget feel of the movie enhances the creepy atmosphere of the film. Jamie Lee Curtis is iconic in her role as Laurie Strode and is a great character for audiences to latch on to. Donald Pleasence is amazing as Dr. Sam Loomis, Michael Myer’s old psychiatrist. At one point he delivers a short speech about Michael that sends chills down your spine. Do I even need to talk about the soundtrack? Even if you’ve never seen the movie, there is almost no way you don’t recognize that piano riff. 40 years after the original they are releasing a new Halloween film that is said to be a direct sequel to the first film, meaning that Halloween II is not cannon to the series. I’m okay with this but call the 2018 version something different. Now when people talk about Halloween they won’t be sure if it’s the original, the remake, or the sequel to the original. Either way, the original will forever be a classic.

Let’s make one thing clear: this is NOT a sequel to Halloween and it does not have any characters from the first two films. The reason why it’s called Halloween III is because they attempted to turn the Halloween franchise into an anthology series that obviously did not work. Audiences were upset that the film had no Michael Myers and for that, it did poorly both financially and critically. With that said, it’s not a bad movie like everyone says it is. The plot centers around Doctor Daniel Challis who investigates a business called Silver Shamrock that sells Halloween masks and is trying to turn the holiday back to being filled with rituals and sacrifices. It’s cool to find a film that goes back to the old traditions of Halloween and that’s why I find this movie to be a good watch for the October season. The production design is definitely the film’s strongest aspect. There are some really nice shots throughout the movie and, honestly, this movie feels more Halloweeny than the first two Halloween films, which makes sense since director, Tommy Lee Wallace, was the art director and production designer for the first film that was filmed in the summer, not fall. Season of the Witch may not be as good as Halloween (1978) but it is definitely better than any of the other sequels (not counting the 2018 one since I have not seen it yet). 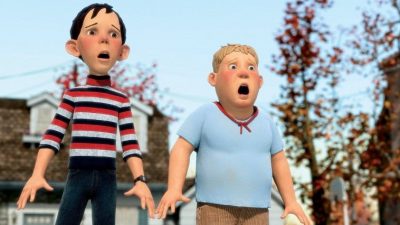 There are many movies about the horror buff that thinks his neighbor his a serial killer, a vampire, or any other bad thing, but I think this is the only film that concentrates on a house rather than the actual person living in it. Monster House stars Disney Channel actor, Mitchel Musso, as DJ Walters, a 12-year-old who finds out his neighbor’s house is alive and must try to stop it with his two other friends before kids go trick or treating on Halloween night. Pretty clever idea with a great execution. It has beautiful cinematography and good direction by Gil Kenan. It’s a very entertaining film. It’s very easy to relate to any of the three main characters. The only negative I can think of is the animation. There are some scenes where it doesn’t hold up too well to today’s standards but it’s not horrible. The story and characters are interesting enough to make you look passed that. My favorite aspect of the movie is the dynamic between DJ and his best friend, Chowder. They both have some funny banter. However, they also have issues. DJ feels like they’re too old to go trick or treating but Chowder disagrees. If you’re looking for a very funny, entertaining, spooky movie, then I am sure Monster House will not disappoint.

If you’re a fan of Halloween and horror movies, Trick r’ Treat is an absolute must watch. I’m not going to go too in depth in case you’ve never seen it but I will say that the less you know, the better. It’s an anthology film with five stories that happen on Halloween night. It’s filled with many practical effects which is always awesome to see, especially since the advent of CGI, most effects nowadays are computer generated. Out of all the movies on this list, this one has the best set design, hands down. There are so many jack-o-lanterns and Halloween decorations. And just like Season of the Witch, this is one of the few horror movies that talk about the ancient traditions of Halloween.  Trick r’ Treat will surprise you and will make you wonder why you haven’t seen the movie earlier.

“The Legend of Sleepy Hollow” is one of the most classic Halloween stories ever made and the 1949 Walter Disney short film is the closest adaptation to the original story released in 1820. This film consists of two short films. The first film is an animation based on the 1908 novel, The Wind in the Willows, and the second film is the sleepy hollow adaptation. Personally, I always skip the first half of the movie and go straight into The Legend of Sleepy Hollow. It’s animated extremely well and has some amazing visuals. It’s just another reminder of how underrated hand-drawn animation has gotten. Everything is so fluid. Each frame will be different than the last, unlike most animated cartoons today. Even though the film is nearly 70 years old, it still holds up extremely well. It’s just a reminder that great classic stories like these never die … especially if you adapt it into a live-action film with Johnny Depp.

If you grew up watching Disney channel, then chances are you’ve probably seen Hocus Pocus already and if you haven’t, you’ve probably heard your friends talk about it and if you still haven’t seen it … then I don’t know. Either way, Hocus Pocus is about a kid named Max Dennison, who accidentally releases 300-year-old witches on Halloween while trying to impress his crush. The movie is filled with costumes, spooky house decorations, and Halloween music which makes this the perfect film to watch at any Halloween event. The witches, played by Bette Midler, Kathy Najimy, and Sarah Jessica Parker, are more hilarious than they are threatening which make for some great comedic scenes. I don’t have too much to say for the film. It speaks for itself. I can guarantee you will at least have a fun time watching it and it’s a sure way to get you into that October mood.