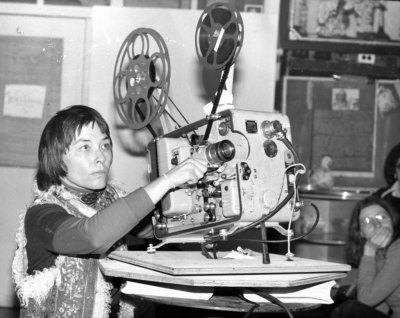 The UNT Media Library recently purchased the full collection of films by filmmaker Barbara Hammer. She was a pioneer of her time, documenting LGBT+ history often with an autobiographical viewpoint and creating over 80 feature length and short films over the span of her lifelong career. Experimental in nature, her films often tested the limits of her cameras and continue to challenge viewers to see things from her unique vantage point.

Here’s just a few of the films in the Media Library collection you can check out:

Tender Fictions: An autobiographical film tracing the life of the filmmaker, including historical footage and stills from pre-Stonewall lesbian history, and other icons of her youth. Hammer challenges a younger generation to visualize a world before they existed.

My Babushka — Searching Ukrainian Identities: Barbara Hammer goes to her ancestral village in the Ukraine in search of her roots.

A Horse is Not a Metaphor: The filmmaker, fighting ovarian cancer, stage 3, returns to her experimental roots, in a multilayered film of numerous chemotherapy sessions with images of light and movement that take her far from the hospital bed. Ms. Hammer changes illness into recovery.

Welcome To This House: A feature documentary film on the homes and loves of poet Elizabeth Bishop (1911-1979), about life in the shadows, and the anxiety of art making without full self-disclosure. Hammer filmed in Bishop’s ‘best loved homes’ in the US, Canada, and Brazil believing that buildings and landscapes bear cultural memories.

Nitrate Kisses: A film with striking images of four gay and lesbian couples with footage of an unearthed forbidden and invisible history. Archival footage from the first gay film in the U.S., Lot In Sodom (1933) is interwoven in this haunting documentary.

To learn more about Barbara Hammer, read her biography here. 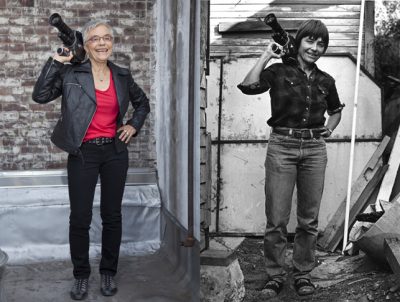