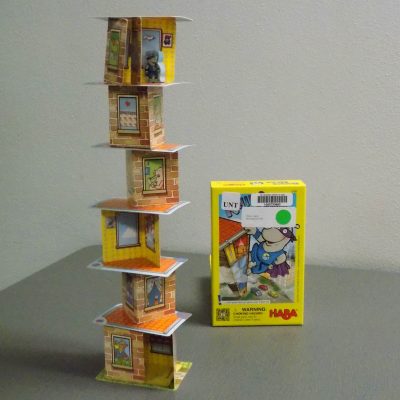 It’s an eagle. It’s a whirly-copter. It’s a… rhino?! Rhino Hero is here to save the day. Scaling buildings in the big city, our overweight hero looks for trouble. Can the building hold him? Beast City builds some of the strongest skyscrapers in the Animal Kingdom, but even the strongest buildings sometimes fall under the strain.

This week we played Rhino Hero from HABA.

One of HABA’s highest rated games, Rhino Hero tasks the players with building a structure able to withstand the stress of having a rhino for a super hero. Can you build a full skyscraper before the structure collapses under the weight?

This game functions with a similar mechanic to Jenga, where players take turns interacting with the tower, hoping the building does not fall on your turn. Each player takes turns adding walls in the form of folded playing cards to match the markings on the last roof card. Some roof cards also call for players to play additional cards, skip turns, reverse order, or to move Rhino Hero up the building. The game ends when one player runs out of roof cards, or the building collapses. 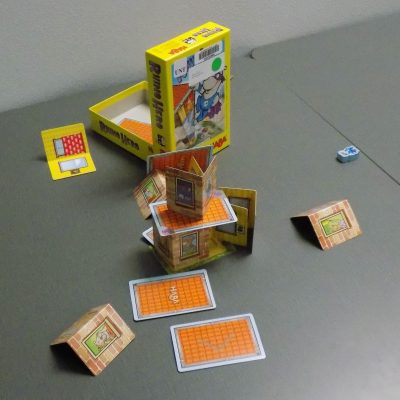 In our 4-player play through, it was clear early on that no one was going to give the other players a break. Each of our more precarious single wall cards were played early, creating a very wobbly base. From there, each movement of Rhino Hero was accompanied by bated breath. A double roof play followed by a poorly timed reversal put one player in a good place to win, doubling the tension. Twelve stories tall, our building began to wobble severely, and with the movement of Rhino Hero, our tower came crashing down.

Every player walked away from the game with a sense of enjoyment. The wide age range of this dexterity game (5+) allows this to be a staple for any family, but the addition of the card powers creates a strategic element that makes this game solid for older groups as well.

We would like to thank HABA for this great donation.

If you would like to give Rhino Hero a try, or another selection from HABA, they are available for check out here, at the UNT Media Library.