We’re at the peak of holiday season, and for most people, that means presents, food, praying for snow, and getting together to enjoy the company of family. This year was a big one for movies that focused on the drama of family life. From funny rom-coms to new horror classics, the ties that bind were a major theme in the media we consumed this year.  Let’s rewind and take a look at some of the biggest movies of the year, and what they had to teach us about family.

Undoubtedly one of the biggest hits of the year, “Crazy Rich Asians” follows Rachel Chu as she meets her boyfriend Nick’s family for the first time – and is shocked to discover that not only is Nick filthy rich, he’s also part of one of the most well connected and established families in Singapore. What follows is a journey of Rachel’s culture shock wrapped up in the anxiety of trying to impress her boyfriend’s judgmental mother, Eleanor, who isn’t impressed by the simple economics professor who stole her son’s heart. This contentious back and forth is at the center of the film’s lessons on how to deal with family.

In the climax of the story, Rachel becomes tired of the battle between Eleanor and herself, and the damage it is causing her relationship. Rachel decides that sometimes the best way to win a game is to refuse to play at all, especially at the cost of her own values. She declares her intent to Eleanor that she will leave Nick, even at the cost of her own happiness. It culminates in one of the best monologues of the year, an excerpt of which is below:

“There’s no winning. You made sure of that. ‘Cause if Nick chose me, he would lose his family. And if he chose his family, he might spend the rest of his life resenting you. […] I just love Nick so much, I don’t want him to lose his mom again. So I just wanted you to know: that one day – when he marries another lucky girl who is enough for you, and you’re playing with your grandkids while the Tan Hua’s are blooming, and the birds are chirping – that it was because of me: a poor, raised by a single mother, low class, immigrant nobody.”

This moment completely shifts the dynamic between the two. Eleanor finally sees that Rachel values Nick, and not just his money and lifestyle. A mutual respect is cemented, and a happily ever after seems possible for Rachel and Nick after all.

A masterclass in tension, “Hereditary” is not for the faint of heart. The buzz around this film grew to a fever pitch in Horror fan circles long before it actually hit the box office, and it did not disappoint. The tremendous talent that is Toni Collette stars in the film as Annie, the matriarch leading this familial drama. There seems to be a lot of darkness that has always followed Annie and her loved ones, but there are only vague hints as to what is going on inside her household at first. An overbearing grandmother, a daughter who collects dead animals, the strange artistic creations that Annie creates as a miniatures artist… All these things present as omens, suggesting a family on the edge of some unacknowledged but waiting danger.

That becomes starkly clear when tragedy strikes in one of the most shocking plot twists and disturbing imagery in modern movie history. Things only get more bizarre as pressure from this tragedy shifts the dynamic in Annie’s household. From bizarre nightmares to dark witchcraft, Hereditary really makes you thankful that most family drama only rises to the occasional angry political debate, and doesn’t end with a demon possessed character crawling up on the ceiling.

The biggest movie of the year was, without any shock, a super-hero movie. That has been a predictable pattern for many years. However, “Black Panther” was different for a number of reasons, not the least of which was its all black cast of actors. Through all the CGI, beautiful costume design, and amazing world-building, “Black Panther” was a family drama at its heart. This tale of kings and royal courts set in a highly modern society at times felt like Shakespeare Does Superheros – there’s even an entire sequence of our protagonist, T’Challa, communing with the spirit of his dead father in a way that hearkens back to scenes straight out of Hamlet.

The real tension of the film focuses on T’Challa and his cousin Erik, perhaps the best villain the Marvel’s Cinematic Universe has delivered so far. These two Wakandan sons fight each other not just as would be heirs to the throne, but symbols of competing philosophies. While T’Challa considers letting the rest of the world in on the amazing advancements of Wakanda, Erik desires the crown in order to make Wakanda a threat to the rest of nations that exploited and enslaved his ancestry for their own advancement.

As T’Challa and Erik both look to the past in order to justify their goals of the future, only one could survive. Defeated, Erik refused surrender, and left “Black Panther” with one of the best lines of dialogue in the franchise’s history.

T’Challa: We can still heal you…

Erik Killmonger: Why, so you can lock me up? Nah. Just bury me in the ocean with my ancestors who jumped from ships, ’cause they knew death was better than bondage.

Kings rising and falling, charismatic villains, and royal intrigue, Black Panther had all the bones of a classic epic tragedy, with really great fight scenes to match.

A documentary that has to be seen to be believed, “Three Identical Strangers” highlights the incredible true story of triplet brothers, separated at birth, and raised in drastically different ways, and the life they developed together once they reunited. In the first phase of the film, as an audience member, you are forced to tell your brain that you are actually watching said brothers detail a true story, as their account of events are so bizarre, it sounds like fiction. Upon discovering one another, the young men are quickly launched into international stardom, appearing on various TV shows, and making a name for themselves in their local area. That’s when you realize there’s still an hour left in movie, and the real drama hasn’t even yet begun.

What starts out as a feel good story about a rather miraculous re-connection delves into a real life conspiracy where people played god in the name of discovery. There is so much more behind the story of the reunited triplets than a simple strange adoption process. Exciting, fascinating, and devastating, “Three Identical Strangers” will make you question the nature of identity itself, and adds more confusion to the age-old debate over nature versus nurture. 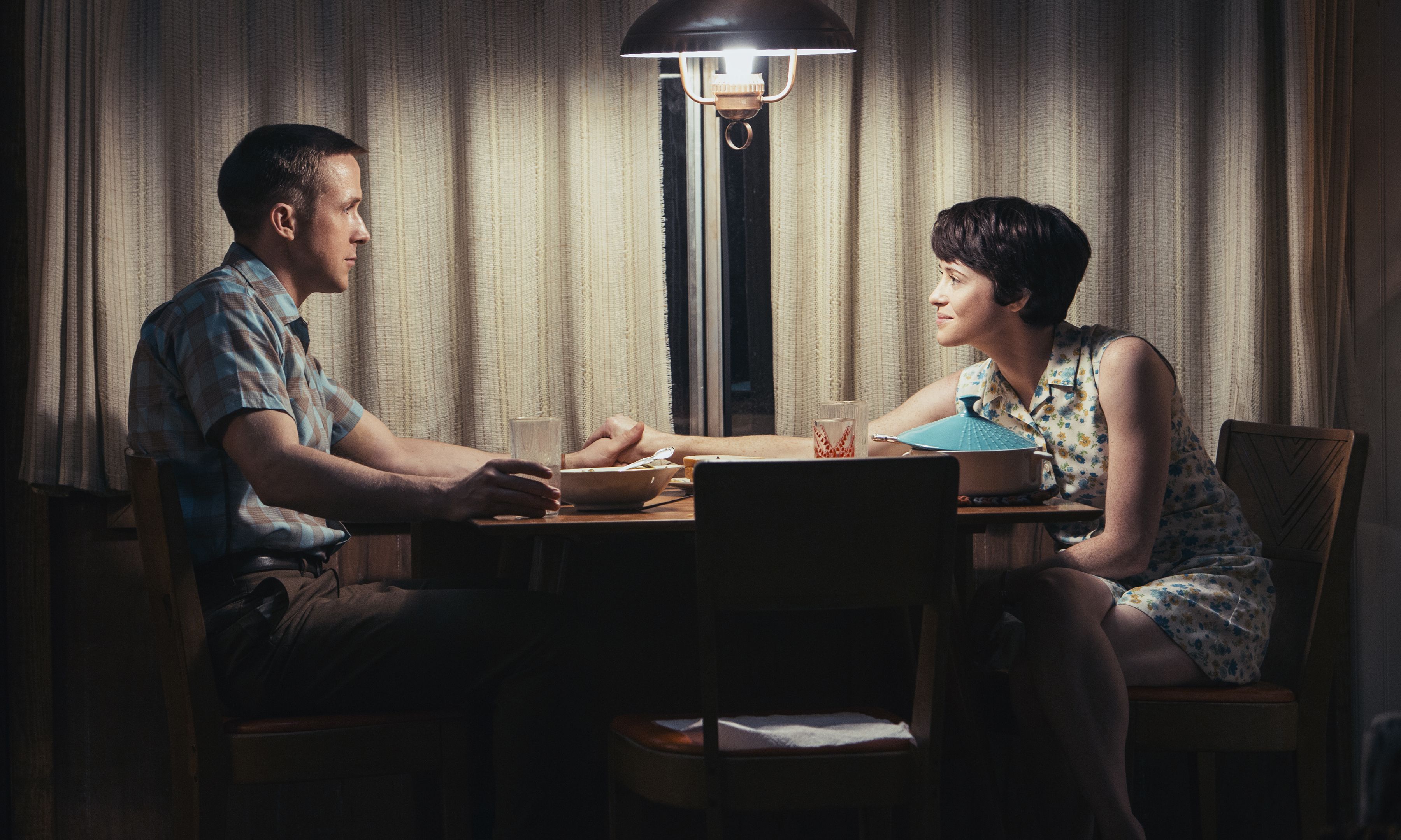 There are few on Earth who don’t know the story of NASA astronauts landing on the moon in 1969. But, there’s more to the story beyond Neil Armstrong’s iconic first words as he stepped onto the Moon’s surface – that one small step was actually a long, arduous, and deadly experiment to defy the heavens themselves and journey off planet. That in itself would be an excellent story to follow – but “First Man” decides to do something very different, and scale back its worldview to center not just on the dream of the Moon landing. The film takes an intimate look at Neil Armstrong the man, not just the astronaut.

The heart of the film is told a majority of the time in intense close ups between husband and wife Neil and Janet Armstrong, played by Ryan Gosling and Claire Foy, reading their expressions on the small scale as they contemplate the larger one. It’s a film not just about the danger and excitement that went into the Apollo 11 mission, but the sacrifice these two very real people made to get there. Neil struggles over the memory of their daughter who died from a brain tumor and staying connected to the living children he leaves behind every time a new risky assignment comes his way. Janet tries to hold together their family knowing her children’s father could be killed with one faulty wire. “First Man” is a reminder that even the grandest of humanity’s accomplishments come down to families making sacrifices for us all to set our sights on greater horizons.

So, as the holidays bring us all together for dinners, parties, and gatherings with loved ones, perhaps take a moment to be grateful that PopPop isn’t spending Christmas on the moon, or Auntie Rose isn’t possessed by a demon. Perspective is important.